Guernsey: In the Driving Seat

Long before the ECJ decision dealing with Marks & Spencer, the old “Organschaft” system was replaced by a new and modern group taxation system in Austria which turned out to be second to none. This new group taxation system came into force on January 1, 2005 and enables corporate entities with their seat in Austria to qualify their domestic and foreign subsidiaries as branches for tax purposes and therefore can set off possible losses of these domestic and foreign subsidiaries from their own tax base. However, not only Austrian companies have access to this tax tool; foreign corporations with their registered branches in Austria can also make use of this system.

Which conditions have to be met to form a group?

In sec. 9 of the Austrian Corporate Income Tax Act the conditions for forming a group are laid down. These conditions are: 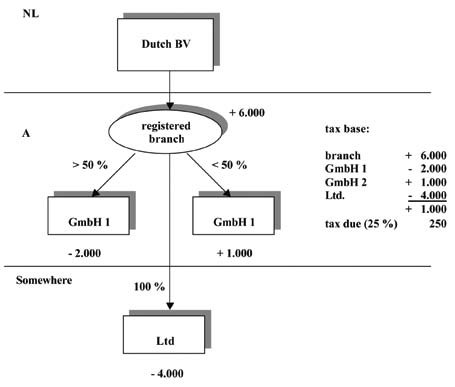 Who can be group parent?

All of the above have to be subject to unlimited tax liability in Austria. Group companies can be either:

There is no restriction to companies in tax treaty countries.

Tax effects of a group

Furthermore, all tax incentives as defined by Austrian tax law have to be considered in calculating the result of the foreign subsidiary. In such a case, the foreign group member will not make use of a loss carry-forward since it suffered no losses according to local regulations, and therefore the loss, utilised to compensate other taxable profits in the hands of the Austrian company, has not to be recaptured. Such losses also have to be recaptured when the group is dissolved within a period of three years after its establishment, or when one of the members of the group leaves the group within these three years.

Benefits of the group taxation system

The benefits of the group taxation system in Austria are evident. Not only does it enable an Austrian company or an Austrian branch of a foreign corporation to compensate its positive income with losses of its subsidiary, regardless of whether from a domestic or foreign subsidiary, but it also enables a group of companies to allocate losses to other entities where necessary.

The following example will demonstrate how far the impact of the Austrian group taxation system goes in the international context and how efficiently it can be used for tax planning.

A foreign company wants to acquire an Austrian corporation which is engaged in the hotel business. The Austrian company runs a very profitable hotel in Austria and plans to acquire another Austrian hotel and to establish a new hotel at the Black Sea in Bulgaria. The Austrian hotel to be acquired shows profits, whereas the hotel in Bulgaria will suffer from losses during the start-up period expected to last for three years and will then become profitable according to the business plan. The optimal use of the Austrian group taxation system will result in the following structure:

The Austrian Group Taxation System is another cornerstone of the already very friendly tax system in Austria, offers far-ranging possibilities for cross-border tax optimisation within a group and offers material support in cases of mergers and acquisitions. Guernsey: In the Driving Seat