The Use of Jersey Companies in Cash Box Placings

Mark Estella provides a technical and practical examination of the use of the cash box structure.

The use of Jersey cash box companies is increasingly popular as a fast and efficient way of enabling a United Kingdom public company to raise equity capital for an acquisition or to reinforce balance sheets through a placing of its shares.

There are two types of cashbox structure: (i) a typical cash box structure, where a United Kingdom listed company (‘UK PLC‘) will receive the entire issued share capital of a Jersey special purpose vehicle, the only assets of which are its cash reserves by way of subscription for ordinary shares in the listed company; and (ii) a convertible bond cash box structure, where a Jersey company is established as a subsidiary of a UK PLC to issue bonds to investors.

How do cash box structures work?

A typical cash box transaction involves the incorporation of a Jersey special purpose vehicle (the ’cash box‘) as a subsidiary of a UK PLC. The cash box will usually be incorporated with ordinary and redeemable preference shares, and be managed and controlled in the United Kingdom (thus avoiding any need for HMRC consent). Additionally, if merger relief is required, it is common for the underwriters or placing agents to acquire not less than 10 per cent of the cash box ordinary shares.

The cash box is then owned 100 per cent by UK PLC, which may then extract the funds owned by the cash box by means of a redemption of the preference shares, an inter-company loan or a winding up of the cash box.

Transfer forms in respect of the ordinary shares and redeemable preference shares will be executed and completed in Jersey to mitigate stamp duty that would otherwise be payable. In practice this is usually done under a power of attorney. 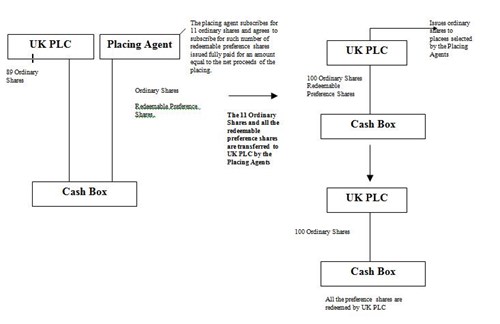 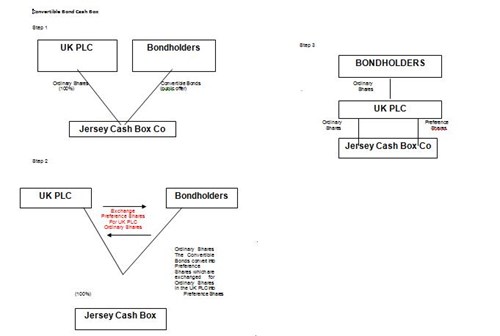 The cash box would need the following regulatory approvals from the Jersey Registrar of Companies: Consent pursuant to Article 2 of the Control of Borrowing (Jersey) Order 1958, as amended (‘COBO’) to the issue of ordinary shares and redeemable preference shares by the Cash Box; Consent pursuant to Article 4 of COBO to the issue of securities (being the convertible bonds) by the Cash Box; and Consent under the Companies (Jersey) Law 1991, as amended (the ‘Law’) and the Companies (General Provisions) (Jersey) Order 2002 (the ‘2002 Order’) to the offer of the convertible bonds and the redeemable preference shares to the public and the circulation by the Company of a prospectus in relation to the same.

In addition UK PLC would need consent under Article 1 of COBO for the raising of money in Jersey by the issue by UK PLC of ordinary shares pursuant to the conversion and exchange of the convertible bonds and under Article 8 of COBO for the circulation in Jersey of an offer for the exchange of the redeemable preference shares for the UK PLC’s ordinary shares. In our experience, obtaining such consents will not have a detrimental impact on the offering timetable.

What documents are required for a convertible bond structure?

Typically, the following documents set out the terms of the transaction:

If the convertible bonds are to be listed it is likely the offering circular will constitute listing particulars for the relevant listing authority. The offering circular will contain a more detailed description of the business of the issuer in respect of a convertible bond offering than a straight bond offering. This is because more information needs to be disclosed to buyers of equity as opposed to debt securities, which are perceived to carry less investment risk. Convertible and exchangeable bonds are treated as quasi-equity securities for these purposes and so require fuller disclosure. An exchangeable bond will contain disclosure on the shares into which the bond is exchangeable. The level of disclosure as to such underlying business will depend on the listing rules of the exchange on which the bond is listed, but in the case of an exchangeable bond will normally be restricted to information derived from published sources.

As in both types of cash box structure the ordinary shares in the UK PLC are not issued for cash, but instead issued in exchange for the issued redeemable preference shares in the cash box. This will allow a UK PLC to allot new shares without having to allot them on a pre-emptive basis as required by section 561 of the United Kingdom Companies Act 2006 (the ’UK Act‘), or to deal with the practical complications of securing shareholder approval for the disapplication of the pre-emption provisions contained in the articles of association.

It should be noted that recently investor groups such as the Association of British Insurers and the National Association of Pension Funds have expressed concern about the use of cash boxes to avoid pre-emption rights and have issued guidance in this respect. Failure to follow such guidance may mean that the ABI could, for example, hold boards to account for breaches of the Pre-Emption Group guidelines and recommend members to vote against the re-election of directors at annual general meetings. It is understood that where a cash box is used to fund an acquisition fewer concerns are raised, as this is within the spirit of the UK pre-emption provisions. As a pure cash raising exercise however, the market response should be carefully considered.

Merger relief may also be available under section 612 of the UK Act, therefore, the cash box is often used to create a merger relief reserve for UK PLC. As a consequence, the premium over par value arising on the issue of the ordinary shares of UK PLC should be treated as a distributable reserve. In consequence, cash box structures are commonly used in conjunction with rights issues.

There should be no need for UK PLC to issue listing particulars or a prospectus for the issue of new shares representing less than 10 per cent of its current issued share capital to institutional investors, thus saving on the time and expense involved in preparing listing particulars.

Jersey companies are able to redeem shares from any source of funds and in the event of redemption of the redeemable preference shares the directors will be required by the Companies (Jersey) Law 1991 (the ‘Law’) to make a solvency statement that the directors believe that the Cash Box can, once the redemption has taken place, pay its liabilities as they fall due and carry on business for the next 12 months or until it is wound up, whichever is the earlier.

The Jersey cash box will be tax neutral, and the transfers of shares arising as a result of the use of the cash box structure will, if implemented correctly, be free of UK transfer taxes.