The Director of the OECD’s Centre for Tax Policy Administration, Jeffrey Owens updates us on the progress being made with offshore non compliance.

Due Diligence - Or Should We S…

In April 2009, G20 Leaders declared that the ‘era of bank secrecy’ had ended. A more exact description would have been that we are coming to an end of bank secrecy being used as a barrier to the effective exchange of information for tax purposes. All countries have some form of bank secrecy, however, this does not normally prevent tax authorities getting access to the information they need to implement effectively and fairly the tax legislation.

The London G20 Summit was a staging point on a long journey towards better cooperation between tax authorities to counter offshore non compliance. This journey started way back in 1977 when the OECD created its Working Party on Tax Avoidance and Evasion, which over three decades worked intensively to refine Article 26 of the OECD Model Convention (the article that deals with exchange of information) and to remove the practical barriers to achieving a better exchange of information.

In 1988 this Group, working with the Council of Europe, initiated the first Multilateral Convention for Mutual Administrative Assistance in Tax Matters. In 2000, the Group provided its report on improving access to bank information, which represented the start of a serious assault on bank secrecy for tax purposes. And in 2002, a Model Agreement on Information Exchange on Tax Matters was agreed between OECD and offshore centres which now forms the basis for over 600 Tax Information Exchange Agreements around the world.

All of this work culminated in 2004 in the first major revision of the Article 26, which made it clear that bank secrecy should not act as a barrier to effective exchange of information.

In parallel to this work the OECD launched work on harmful tax practices. It was a two part project. The first part addressed harmful preferential regimes in OECD countries; the second so called ‘tax havens’.

What all of this meant was that by the time the G20 took up the question of tax havens and bank secrecy, all of the preparatory work was done: we had the standards; we had a review mechanism; we had a Global Forum; we had identified potential defensive measures.

The political support from the G20 convinced jurisdictions that the ‘era of bank secrecy’ was coming to an end and that they needed not just to commit to new transparency and exchange of information standards but that they also needed to implement the standards.

To achieve this, the Global Forum on Transparency and Exchange of Information for Tax Purposes, which was created in 2001, was restructured and made more inclusive; a peer review process was put in place and a methodology and a timetable for the reviews agreed upon (www.oecd.org/tax/transparency).

Today, the Global Forum encompasses 95 countries and is set to continue its expansion. The Forum is chaired by Australia and has a Steering Group and a Peer Review Group, which is responsible for assessing whether jurisdictions are implementing the standards.

The peer reviews are carried out in two phases. Phase I examines the legal and regulatory framework; Phase II the practical implementation. In some cases, there are combined Phase I and Phase 2 reviews. In September 2010, the Global Forum met in Singapore to examine the first eight Phase I peer reviews[1]. Each review made recommendations for improvement – 64 recommendations in total. In the cases of Botswana and Panama, the deficiencies were considered sufficiently serious that they were not allowed to go on to the Phase II (there is little point in examining practical implementation issues if the required legal framework is not in place). Both jurisdictions now have 12 months to address the Forum’s recommendations and this process has begun.

What Singapore showed is that the peer review process is working. The reviews are in-depth and consistent as between jurisdictions. Recommendations for improvements are being identified. Jurisdictions under review are cooperating. Big and small, OECD and non-OECD jurisdictions are being subjected to the same procedures. Difficult issues are being openly addressed – access to information and beneficial ownership; trusts; the need for good access to accounting information. 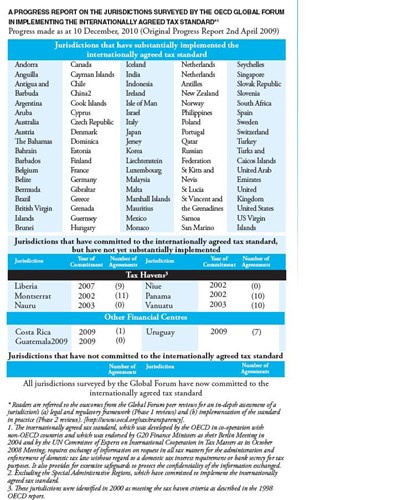 Due Diligence - Or Should We Say ‘Do Diligence’