Martin Crawford looks at the how Hong Kong and Singapore bridge the gap between the onshore and offshore world in Asia and how all IFCs must examine the role they play in increasingly complicated offshore structures.

Taking the BVI Public: Using B…

Drawing on their international credibility and skilled workforces, Hong Kong and Singapore are a bridge between the onshore and offshore worlds in Asia. The rise of these two jurisdictions will not come at the expense of others; but all international financial centres must re-examine the role they play in increasingly complicated offshore structures.

International financial centres seem to be in a constant state of change. In an industry built on reputation – with efficiency, regulatory flexibility, low costs and high levels of service the foundation stones – jurisdictions are under pressure to stay competitive. Over the years, factors ranging from political instability to legislative laziness have seen certain financial centres stand still or retreat, allowing others to gallop past.

The renewed drive for greater tax transparency has fundamentally altered the competitive landscape. Jurisdictions, especially those that have emerged on the back of zero-tax policies, must ask themselves how they can stay relevant in an era of greater information exchange. Service providers, for their part, are reorienting tried and tested structures so that they strike a balance between the needs of clients and regulators.

The industry is changing to the point that the word “offshore” is in some cases no longer a fair reflection of the preeminent structures or jurisdictions’ marketing strategies; investors are increasingly open to incorporating an onshore element into their business plans.

In Asia, which is emerging as the principal driver of the industry as a whole, Hong Kong and Singapore are uniquely positioned to take advantage of the new environment. Not only are they offshore financial centres complete with business friendly tax policies, but they also boast robust onshore financial services industries.

Hong Kong and Singapore therefore represent a bridge between the onshore and offshore worlds – they have become, in part by design and in part by default, Asia’s ‘mid-shore’ jurisdictions.

Hong Kong and Singapore already occupy a niche in the financial services industry. Like many other jurisdictions, they offer strong legal systems, high levels of service, relatively painless bureaucracy and attractive tax policies (although they are low-tax rather than zero-tax). But Hong Kong and Singapore differ in that they are genuine trade hubs: they are plugged into financial and logistical networks that extend all over the world.

Other countries want to do business with Hong Kong and Singapore and this explains the relative ease with which they have accumulated double tax treaties, now a key selling point for international financial centres.

A clear derivative benefit is talent. Hong Kong and Singapore’s economic advantages translate into better incomes and higher standards of living for all involved. As long as they remain the preeminent places to live and work in Asia, they will continue to attract skilled workers. Offshore service providers, wealth management firms and private banks are beginning to pay more attention to the Asian market and they are setting up offices everywhere from Shanghai to Mumbai to Manila – but none of these could serve as a regional headquarters.

It is important to note that this is no zero-sum game. While Hong Kong and Singapore are seen to have their respective competitive advantages – mainland China access and funds management in the former, private banking and wealth management in the latter – if anything, business is dividing along geographical lines: Hong Kong is strongest in north Asia, and in particular mainland China, and Singapore takes the lion’s share in south Asia.

Importantly, the rise of these two jurisdictions is not going to come at the expense of the long-standing tax neutral offshore locations.

OIL Group recently commissioned a survey (entitled Offshore 2020: An Asian Perspective) of industry participants in Asia in order to get a sense of how the investor preferences are changing in Asia. Asked to score jurisdictions in terms of importance (see appendix 1), respondents came back with a fairly predictable set of rankings, with the British Virgin Islands (BVI) and the Cayman Islands sitting atop the list, followed by Hong Kong and Singapore.

Respondents were then asked to score the jurisdictions based upon their expectations for the industry in five years time. The most startling gains were made by Hong Kong and Singapore, but no one expected a corresponding decline in the importance of BVI and Cayman – or Mauritius, Bermuda, Samoa and Seychelles, for that matter.

As investment structures become increasingly multi-layered, jurisdictions are performing different roles along the chain based on their respective competitive advantages – be they tax neutrality, tax treaty access, administrative simplicity or basic geographical convenience.

For example, a private equity fund may be registered in Cayman and set up a structure in Hong Kong that in turn holds assets in China. A Netherlands trading company may channel its business via Seychelles, with the ultimate owners managing their business through a Singapore entity.

In each case, Hong Kong and Singapore function as the staging posts for investment going into or coming out of Asia: they have the credibility, infrastructure and talent pools to cope with sophisticated demands and they offer proximity to funding sources or targets.

With regulators placing ever more emphasis on substance as means of qualifying for tax treaty benefits, Hong Kong and Singapore are the onshore element that enables investors to fully leverage the benefits of offshore structures. This is the essence of mid-shore. 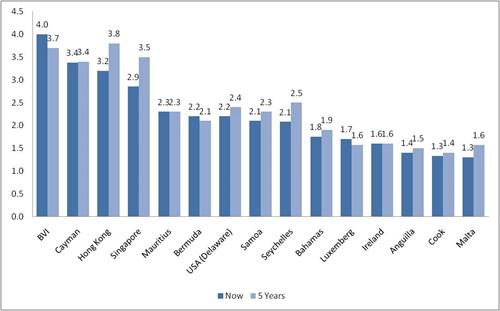