Investments through IFC Companies into the People’s Republic of China

John Collis, Paul Lim & Teresa Tsai examines the use of IFC companies in the Peoples Republic of China.

Despite criticisms by the OECD and G20 heads of state against offshore financial centres with regimes based on tax neutral models, Bermuda, Cayman Islands and the British Virgin Islands continue to lead the way as jurisdictions of choice for corporate investment structures and deal flow in international ‘cross border’ investments and financing transactions in connection with inbound and outbound investments in the PRC.

Opinions on offshore financial centres are often polarised where antagonists would attempt to argue that the form of corporate investment structures used to minimise tax issues in the structuring of international transactions in the global financial system leads to the negative effect of erosion of wealth in developed nations. In fact, these structures have not lead to the erosion of wealth in developed nations and empirical evidence would suggest that the use of these offshore investment corporate structures have instead alleviated and enhanced economic growth in and reduced poverty in the PRC as a case in point.

In a free global economy, jurisdictions both offshore and onshore are free to structure their tax regimes and revenue regulations in any manner that achieves economic success. Although offshore financial centres were initially designed with the aim of creating structures designed to minimize tax, it is now arguable that tax issues are the least dominant factor or even a factor attributable to the success of offshore financial centres, particularly in terms of international ‘cross border’ investments and financing transactions and should be discarded as a consideration.

Today, offshore financial centres like Bermuda, Cayman Islands and the British Virgin Islands (‘BVI’) are sophisticated, nimble and in sync with the current global transaction deal flow and the use of its available corporate investment structures, namely, the Bermuda, Cayman Islands and the British Virgin Islands special purpose companies in the form of exempted offshore companies, exempted limited partnerships or trusts (the ‘IFC Company’), play a significant, if not major role, in international and global trade and finance. These IFC Companies are commonly used as a ‘cross-border’ special purpose vehicles or investment holding companies through which investors are able to participate in ‘cross border’ merger and acquisition transactions, private equity deals, pre-IPO financings, debt equity capital markets financings, aviation acquisition transactions including international banking financing transactions. They offer a politically stable environment as British Overseas Territories, strong independent legal systems based on English common law, first class infrastructure facilities, professional services and lighter regulatory requirements all of which are seen to be a major determinant factor in using IFC Companies to participate as investment vehicles - rather than the perceived tax benefits.

Against this background, given the growth of the ever increasing PRC market economy and the PRC’s fear of the prospect of outflow of wealth, more developments in the regulatory and tax aspects of investments into and out of the PRC have been put in place, which have to be taken into account in structuring investments which are compliant with the PRC regulations in particular (Circular, 10, 19 – M&A rules and Circular 698 - Tax), which is beyond the scope of this note.

Nonetheless, we continue to see the use of the IFC Company as the preferred jurisdiction in respect of the use of offshore corporate structures for investments into and out of the PRC as discussed below.

Until now, Bermuda, Cayman Islands and the British Virgin Islands IFC Companies remain de rigueur as a platform or conduit from which investments are channelled into the PRC.

For flexibility, there will generally be IFC Companies and a Hong Kong company interposed between the PRC domestic business and the IFC Companies through which the PRC founders hold shares. With this structure in place, the angel round PE investors will invest through the IFC Companies generally by way of redeemable preference shares (‘RCPS’) with follow on investments, as required, in the form of different classes or series of RCPS with tailor made rights specific to the transaction which generally includes, liquidation rights, protective voting rights, conversion rights, co-sale rights, drag rights, pre-emptive and trade sale rights and the like.

Once critical valuation is achieved and the target is ripe for exit, the PE investors may exit either by way of a trade sale if there is a potential buyer or by way of an initial public offering (‘IPO’) of shares on a stock exchange (typically The Stock Exchange of Hong Kong or NYSE or NASDAQ exchanges). In practice, a trade sale is generally the preferred choice for an exit as an IPO exit demands the allocation of management resources, is time consuming, will incur further costs, is subject to market appetite for its shares and may involve a lock up of shares for a certain period of time before they can be disposed off.

The Block Diagram I depicted below sets out in a simplistic generic form a typical investment structure into the PRC using IFC Companies. The structure varies depending on the group structure and business requirements of the PRC business operations. PE investors will participate indirectly in the PRC business operations through an IFC Company and when the operations are ready for an IPO, the BVI entity above the proposed Cayman Listco as shown in Block Diagram I is removed through a reorganisation of the structure in preparation for the listing exercise. BVI entities are commonly interposed above and below the proposed Cayman Listco to provide flexibility to the structure in the event further ‘spin off’ restructuring is required or disposal of shares are made above or below the Cayman Listco. 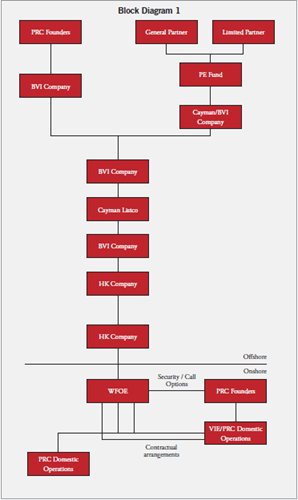 With respect to the onshore investment structure at the WOFE level, the PRC business and operations are generally held directly by the WOFE if the PRC business operations fall within a business sector that permits foreign investment, subject to compliance with the PRC regulatory requirements. Alternatively, if the PRC business falls within a restricted business sector (eg, media, energy or infrastructure projects), which prohibits foreign investment or is unable to comply with the PRC regulatory requirements, a variable interest structure or ‘VIE’ may be used to indirectly circumvent the restrictions where the WOFE enters into contractual arrangements with the business entities and the PRC founders, designed to control the PRC business entities and to provide the intended economics of the investment transactions. The contractual arrangements are also supported by share charges and call options to provide some form of investor protection.

With regard to issues of non-investment grade high yield notes and bonds, by PRC entities (again, this assumes a PRC business listed on an exchange in the form structured as discussed above), the issuer is generally a listed IFC Company where the issue is secured by assets or shares of the subsidiary companies within the group and where priority over the security is governed by an intercreditor arrangement for further issues. In convertible bond issues, again IFC Companies are normally used as the issuer with the bonds convertible into the shares of the listed IFC Company where no security is generally given except for a guarantee by the parent holding company.

Likewise, in the case of PE funds, the investment structures are similar to the IFC Company structures used for private equity investments, except that the offshore investment fund vehicle is generally structured as a limited partnership organised in Bermuda, Cayman Islands or the BVI.

Cayman Islands and BVI limited partnership PE funds are more common in practice and investors are invited to participate as limited partners in the PE Fund operated by the general partner that indirectly holds the PRC domestic target business through intermediate IFC Companies and Hong Kong special purpose companies (‘HK SPVs’). Block Diagram II below sets out a typical PE fund structure in simplistic generic form where investments are made by the PE fund indirectly into the PRC domestic business. Variations in the forms of funds structures (eg, master, feeder, segregated funds and funds of funds structures) are also used as appropriate depending on the complexity of the business model and scope of investment of the PE fund.

At the intermediate holding level, IFC Companies and Hong Kong SPVs are interposed to provide flexibility on disposal and exit situations. The Hong Kong SPV will in turn hold interests in the PRC domestic operations and subject to PRC regulatory requirements and the nature of business sector which the PRC business operates, the Hong Kong SPV may either hold the PRC business operation directly or alternatively through the medium of a cooperative joint venture arrangement (‘CJV’) or equity joint venture arrangement (‘EJV’) in partnership with the local PRC partner. 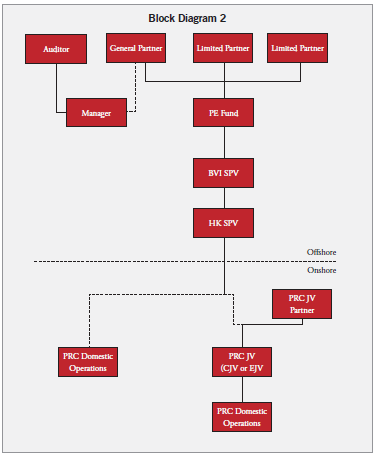 Since the liberalisation of the Chinese economy, the Middle Kingdom has continually absorbed capital from foreign investments and not until recent years, has she begun to embark on seeking investments overseas, in particular in Africa, Australia, Brazil and Indonesia amongst others.

As a result of its growing domestic demand, in particular, for energy and natural resources amongst other capital goods, PRC companies are increasingly looking for more opportunities to invest overseas to satisfy its domestic demands.

Investment vehicles that are being used to bridge such investments are again IFC Companies. The primary sectors of investments are in the oil and gas exploration and mining for natural resources (eg. iron ore, coal etc). The investment structures are less complicated and IFC Companies are normally used to hold overseas investments directly or as financing vehicles to raise capital to fund overseas mining explorations or to participate in joint ventures in respect of overseas business operations.

In this space, deal flow that we have seen involved the use of IFC Companies to structure the issue of exchangeable notes to PRC entities, investing through IFC Companies to finance mining and exploration activities in Indonesia secured by guarantees and debentures over BVI, Singaporean and Indonesian subsidiaries within the investment structure.

In the case of outbound Chinese PE funds, it has been reported that such funds are beginning to positions in overseas investment opportunities but this will probably involve a much longer gestation period. However, the stakes are high as these funds will be competing for investment dollars and deal opportunities with their more matured and aggressive Western counterparts like Bain Capital, KKR, and Blackstone etc, and there is moreover the uncertainty of whether Chinese PE funds venturing overseas will be acceptable to western fund investors.

In practice, we continue to see the use of IFC Companies to structure investments into and out of the PRC as standard fair.They are particularly suited for investments into the PRC given that the PRC’s business and regulatory environment is continually evolving as it moves towards a fully developed nation state. The use of IFC Companies provides investor protection to foreign investors who are comfortable and familiar with the offshore legal systems based on English common law, and investors invariably prefer to use IFC Company structures to effect investments instead of participating directly in investments into the PRC. Moreover, IFC Companies are convenient to use, cheaper to maintain and given their modern up to date and lighter companies legislation, IFC Companies are flexible and may be restructured on short notice to suit the nature and requirements of any particular transaction for inbound and out bound investments into and out of the PRC. Also, in financing transactions they act as the conduit for aggregating capital from multiple sources to participate in investments.

Overall, notwithstanding the negative rhetoric surrounding offshore financial centres, we continue to see and arguably will continue to see, given its entrenched position, the use of IFC Companies as the investment platform of choice to bridge inbound and outbound investments into and out of the PRC and, more so, if the thought provoking analysis of Martin Jacques in his book When China Rules the World proves true.