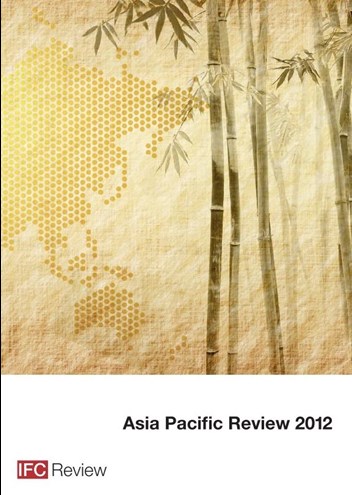 Welcome to the Asia Pacific Review 2012. It has not gone unnoticed that financial centres in the Asia Pacific region have proved to be a lot more resilient to the economic crisis over the last number of years than their counterparts in the West.

While Europe and the US continue to flounder with their economic travails, Asian IFCs have in no small way assisted with the challenging but on-going recovery of the Asian economy. Not only have they acted as conduits for wealth flowing into the region, they are fast becoming the necessary investment stepping stones from Eastern financial powerhouses like China into developing and emerging markets in Africa and Latin America.

As has been widely documented, wealth has grown significantly in Asia. The number of millionaires in the region has surpassed that in Europe for the first time and is second only to the US. Global wealth managers and private banks are not been oblivious to this incredible growth curve and are making a beeline for the region - in particular to the wealth management hubs of Hong Kong and Singapore. Indicative of this is the increase in the number of family offices opening in Asia, not only as Europeans move their wealth East, but as wealthy Asians look to new ways to protect and grow their wealth.

As Reuters reported in April: “Asia’s prospects are alluring as economies in Europe and the United States look weak.”
It is not difficult to see why investors are looking for opportunities outside the US and Europe, between Europe’s financial and economic difficulties and the US government’s attempt to over- regulate the industry and the individual into a financial malaise, Asia’s significant benefits are inevitably going to prove attractive.

But it is more than that, the IFCs in Asia are responding well to this increased interest in their wares and have developed a sophisticated product portfolio, which has been detailed in the articles collected in the Asia Paci c Review, written by the very professionals working in the region.

Furthermore, the smaller or less well known IFCs in the Asia Pacific region are rising to the opportunities this Eastward flow of wealth is providing. Labuan is gaining in sophistication with its raft of trust and company laws, Brunei is also making inroads into the international finance industry, while New Zealand continues to promote its foreign trust regime.

In the Asia Pacific Review 2012 we examine what the IFCs in the region have to offer the international financial industry, how they are adapting to the influx of wealth and how they now becoming active rivals to the more traditional financial centres based in the
Americas and Europe.

Wealth management structures that are relatively new to the Asian market, like the family office and the foundation are examined, as is the development of trust structures in China.

Jay Krause and Philip Monro, in their industry overview article, examine how Asian IFCs are beginning to justifiably rival their counterparts in Europe and the Caribbean, assessing what specifically is giving the likes of Hong Kong and Singapore, an edge over Western financial centres.

In his interview with the Asia Pacifc Review, Martin Crawford, CEO of Offshore Incorporations Ltd, discusses the important place Asian IFCs now hold in the global financial infrastructure and considers how the financial centres will continue to develop and adapt to their new roles in the wake of the global economic crisis.

In his article, Thomas Schulz considers the use of family offices in the region. The family office is a relatively new concept in Asia but one which is inevitably going to see a lot of growth in the coming years. Meanwhile Thomas Granger and Arwel Lewis assess the ‘rapid growth and success of China’s private equity industry’ with Hong Kong as the central hub for the Asia Pacific equity industry. In mainland China, Li Lee Tan outlines how the trust as a wealth management structure is taking off and considers how offshore trusts will be well-placed to satisfy the ‘country’s appetite’.

Our contributors then move on to examine the development of foundations in Labuan and offshore trusts in New Zealand.

There is no doubt that the global financial axis has tilted towards Asia and it is hard to imagine the position of the once dominant Western economies being restored any time soon. Asian IFCs are rising to the challenges and opportunities that this presents and can no longer been seen as anything but significant players in the global movement of wealth.

At the IFC Review we have brought together some of the main players in the Asian international financial industry to illustrate how IFCs in the region have developed over the last number of years to become the cream of the international financial centre crop. Once again I would like to thank all the contributors to the Asia
Pacifc Review 2012. 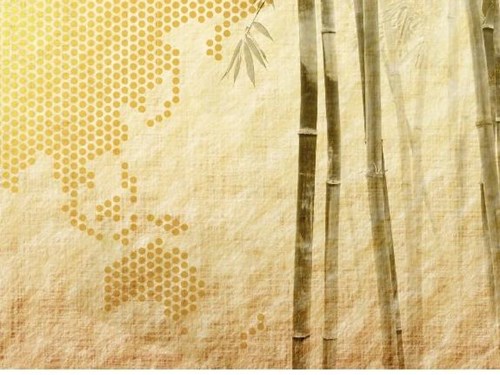 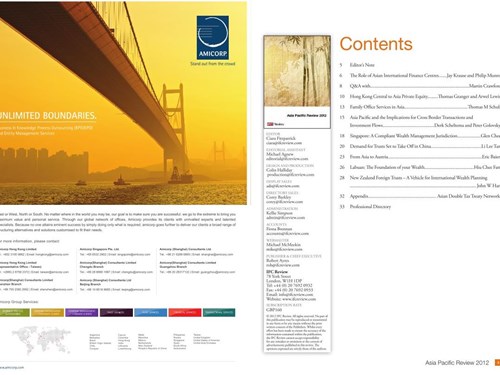 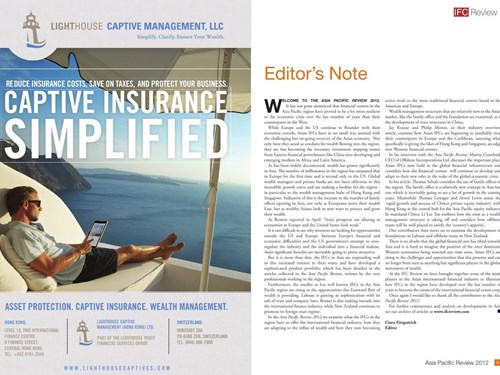 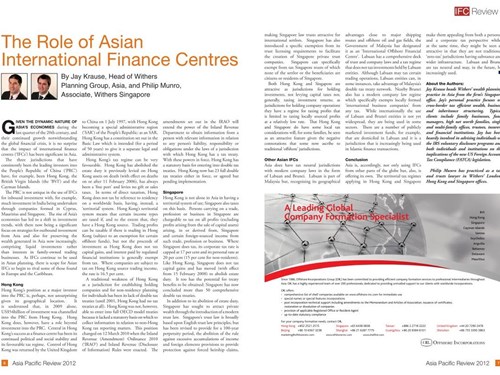