Since the economic crisis of 2008-09, Offshore Financial Centres are again the focus of the world, Alfred Schipke, IMF highlights the trouble many OFCs have in finding the right balance in regulation.

Regulatory Evolution in the Ca…

Offshore financial centers are again the focus of many countries in the world. Some are looking to increase the size of the sector; others are trying to tighten the rules and regulations under which they operate. For both sets of countries, the increased interest is directly related to the fallout from the 2008–09 global economic and financial crisis.

On the one hand, faced with lower growth and high rates of unemployment, countries are searching for new sources of growth, and some of them—including smaller ones—are looking toward offshore financial centers (OFCs) as one potential source of future growth.

On the other hand, the fallout from the global crisis has accelerated efforts by a number of global bodies to target OFCs and the tax and regulatory environment in which they operate. A number of national regulators and supervisors, in turn, are concerned about the potential spillover from weakly regulated and supervised offshore financial banks into the onshore sector, which can undermine the health and stability of entire financial systems and result in high fiscal costs and economic hardship or disruptions. Therefore, balancing these competing objectives is paramount for countries that are considered OFCs or are pursuing expansion of the sector.

What Are OFCs and What Are their Benefits?

Although no single definition encompasses all OFCs, these entities share a number of characteristics—the primary orientation of the business in OFCs is toward nonresidents, and OFCs take advantage of existing loopholes in onshore legal frameworks and the presence of low or zero taxation structures. OFCs specialise in supplying financial services to nonresidents far in excess of the size of their host economies (Rose and Spiegel, 2007; and Zoromé, 2007).

Offshore financial centers provide a large range of financial services, including international banking, headquarter services, foreign direct investment, structured finance, insurance, collective investment schemes, and so forth. Benefiting from relatively low start-up costs, they often provide attractive tax regimes, as well as privacy and secrecy rules. For example, by providing international banking services, they allow corporations and individuals residing in politically or economically unstable countries to protect their assets by placing them overseas and to avoid scrutiny by doing so. OFCs also play an important role in the internal organisation of multinational firms. For instance, the financial management and treasury operations of multinationals typically include offshore affiliates that support certain transactions, such as new acquisitions or mergers, or that permit foreign direct investment to be financed with debt rather than equity. In addition, companies benefit from a number of legal and tax advantages when headquarters services are provided from the OFC. According to the US Government Accountability Office (GAO, 2008), more than 730 companies trading on US stock exchanges, including Coca-Cola, Oracle, and Seagate Technology, reported to the US Securities and Exchange Commission that they are incorporated in the Cayman Islands. Also, some firms opt to locate their head office in an OFC, with onshore activities being conducted by affiliates of offshore headquarters.

From the point of view of the host country, OFCs provide a number of direct benefits such as direct employment, spillovers to other sectors in the economy (tourism, infrastructure, telecommunications, and transportation), and government revenue from taxes and fees. For example, in both The Bahamas and Barbados, revenue was estimated at about eight per cent of GDP in 2008. The empirical evidence also suggests that higher OFC-related capital inflows have a positive impact on economic growth. The positive impact of OFCs and growth are also supported by Hines (2010). And these results hold true irrespective of whether a country or jurisdiction is classified as a ‘tax haven’.

According to the IMF’s Coordinated Portfolio Investment Survey database, inflows into OFCs increased significantly before the 2008–09 global financial crisis, and the share of OFCs in the global financial system remained fairly stable during the crisis period. At the end of 2009, some 40 OFCs accounted for about eight per cent of worldwide cross-border portfolio liabilities and assets.

The Caribbean accounted for a disproportionately large share of OFCs, representing about five per cent of worldwide cross-border liabilities. Within the Caribbean, the Cayman Islands accounted for close to three-quarters of the sector (see Figure 2). In aggregate, OFCs have generally maintained balanced participation in the debt and equity markets.

Harbouring OFCs, however, is becoming increasingly challenging and potentially very costly. Policymakers in advanced economies have stepped up their efforts to increase fiscal revenue by closing loopholes and going after so-called tax havens. At the global level, as a result of the fallout from the global financial crisis, efforts are increasing to strengthen global financial systems, including by increasing pressure on OFC host countries and jurisdictions to intensify their adherence to financial standards and information sharing.

These efforts are being led by a number of international bodies that have launched or reinvigorated initiatives to strengthen the tax and financial regulatory policies that apply to OFCs. The key bodies are the Global Forum on Transparency and Exchange of Information (OECD/Global Forum), the Financial Stability Board (FSB), the Financial Action Task Force (FATF), and the G-20 (see Figure 1). These global initiatives share many of the same objectives and, most important, have similar implications for OFCs because of the possibility of ‘naming and shaming’ or so-called gray/black lists (see Figure 1).

After being put on a grey/black list, for example, many large international financial institutions exited from OFCs in 2008–09. Also, empirical evidence indicates that grey/black-listed OFCs experienced a decline in their share of global capital flows relative to their white-listed competitors. Conversely, signing the tax information and exchange agreements (TIEAs) required to be put on the Global Forum/OECD’s white list had a positive impact on portfolio capital flows to OFCs[1].

In addition to the direct impact of being grey/black listed, potentially severe reputational risks could apply not only to the offshore sector itself, but to the country overall. Countries that intend to target high-value services such as tourism to foreigners could see their reputations tarnished. Apart from any reputational risks, the global community could apply outright sanctions. Hence, a good understanding of these global and toughening initiatives is critical to minimising any adverse implications.

Among all types of OFC activities, offshore banks pose the most significant risk as revealed by a number of high-profile cases in which offshore banks were allegedly related to Ponzi schemes (Carvajal and others, 2009). Problems in offshore banks can also threaten the stability of the domestic financial system when such banks are associated with onshore commercial banks. The existence of multiple regulators and supervisors, and the possibility that they do not share information, might limit their ability to detect outright fraud and prevent spillovers to the onshore sector. These experiences highlight the need to strengthen regulation and supervision, including by moving toward consolidated supervision of commercial banks that include offshore bank affiliates.

What Are the Key Takeaways?

OFCs have become an important part of the global financial system and are again at the centre of attention of policymakers across the globe. This rekindled awareness is directly related to the fallout from the 2008–09 global financial crisis, a number of high-profile scandals involving OFC-related Ponzi schemes, and the spillover of offshore financial sector problems to the onshore banking sector.

For some countries or jurisdictions, OFCs are a legitimate source of potential growth, employment, and fiscal revenue at a time when they are faced with more headwinds from the global economy. Indeed, some empirical evidence shows that activities of large OFCs positively contribute to growth. At the same time, OFCs are also faced with more, and more-complex, global oversight initiatives, ranging from the Global Forum/OECD, FSB, and FATF, to individual G-20 members. Failure to comply with these global initiatives has potentially severe consequences for the host OFC, including the risk of naming and shaming; adverse implications for the reputation not only of the OFC sector, but possibly the entire country; and even outright sanctions. A number of high-profile OFC-related Ponzi schemes and spillovers of OFC problems into the onshore banking sector highlight the need for improved regulation and supervision.

Striking the right balance is therefore crucial for countries that intend to continue to operate, or even increase the size of, OFCs. Host countries and jurisdictions will have to evaluate carefully the costs and benefits of their OFCs. They must proactively meet the requirements of global oversight initiatives to maximize benefits and improve the regulation and supervision of the OFCs, including through consolidated supervision. These steps, however, require that OFC host countries devote sufficient resources and human capital to staying up to date on developments.

María González and others , “Offshore Financial Centers: To Be or Not to Be?”, in Eastern Caribbean Economic and Currency Union—Macroeconomics and Financial Systems, ed. by Alfred Schipke, Aliona Cebotari, and Nita Thacker, (Washington, DC: IMF), Forthcoming. 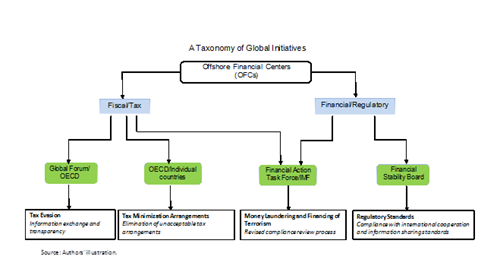 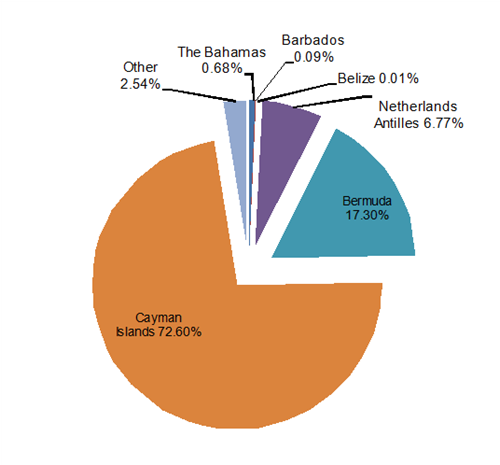 [1] The Caribbean, for example, has demonstrated its commitment to meet international standards. Although many countries initially found themselves on a black/grey list, all of them signed the necessary Tax Information and Exchange Agreement and are now on the white list. The Caribbean is also making efforts to increase compliance with Financial Action Task Force.

Alfred Schipke, Advisor in the Asia and Pacific Department, International Monetary Fund and Adjunct Lecturer in Public Policy at the Kennedy School of Government, Harvard University

Regulatory Evolution in the Cayman Islands