Austria – A Perfect Hub for Investments into Europe and Africa

Erich Baier discusses Austria’s suitability as a base for international investment into Europe and Africa, due to its location in the centre of Europe and its stable and predictable law system.

In a totally globalised world more cross-border transactions are carried out every day than ever before. For the international entrepreneur it is therefore crucial to find a stable and robust jurisdiction which can build from the platform for such an international business.

The requirements for such a jurisdiction are of course to have a stable and predictable law system, to provide an extensive tax treaty network as well as a tax system which supports or even enhances the repatriation of pro­fits in a tax efficient way and where a company can be established easily.

Fortunately such a jurisdiction does not need to be created; it already exists, in Austria.

Located in the centre of Europe at the cross-roads between East and West Austria perfectly serves the needs of international entrepreneurs and investors.

Austria has Double Tax Treaties with Belize and Barbados, enjoys the pleasure of having a marvellous tax treaty with the UAE as well as with Bahrain, Kuwait, Qatar and Saudi-Arabia and with Hong Kong and Singapore and of course has tax treaties with Liechtenstein, Malta and Cyprus, just to name but a few of these 90 tax treaties.

In addition to that Austria currently has 59 Investment Protection Treaties with other countries, which protect investments made via an Austrian structure from nationalisation in the other countries.

States are not exposed to any withholding tax at source nor are interest or royalty payments made from subsidiaries located in the European Union.

Some of the key features of the Austrian tax system, especially within regard to the tax treatment of foreign source income can be found below.

The key features are:

Austria is also famous for its holding regime and any corporate entity, subject to unlimited tax liability in Austria meeting the requirements in Table A, can obtain foreign source dividend income and foreign source capital gains resulting from the sale of shares of the foreign subsidiary tax exempt. 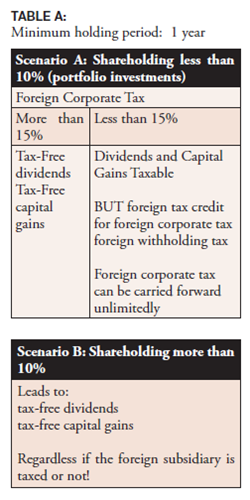 Also of signi­ficance is the fact that the income achieved via a foreign partnership or a foreign permanent establishment can obtain tax exempt status in most cases.

According to the Austrian Income Tax Act losses suffered by a foreign permanent establishment or a foreign partnership of an Austrian taxpayer are tax deductible in Austria as shown in Diagram A. 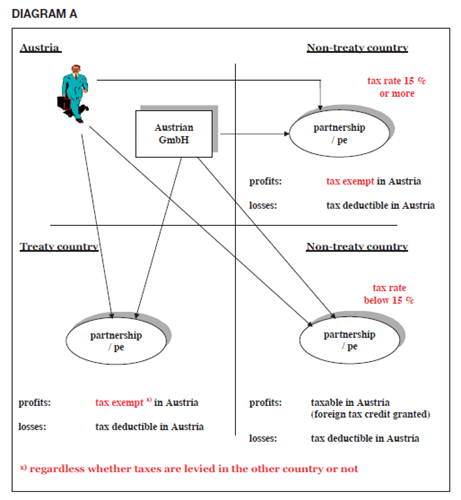 In 2005 Austria implemented a new group taxation system which is second to none. – is tool leads to material tax savings and unrivalled tax planning opportunities provided that:

The following case study will demonstrate how tax efficient such an Austrian structure can be for an international investor, who not only wants to enjoy a low tax burden but also wants to enjoy the privileges of operating from a platform built in a reputable jurisdiction.

Case Study: Illustrated in Diagram B 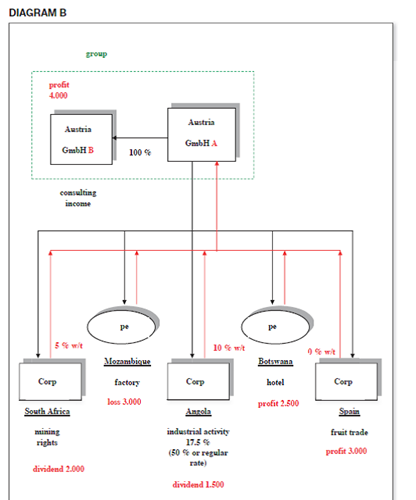 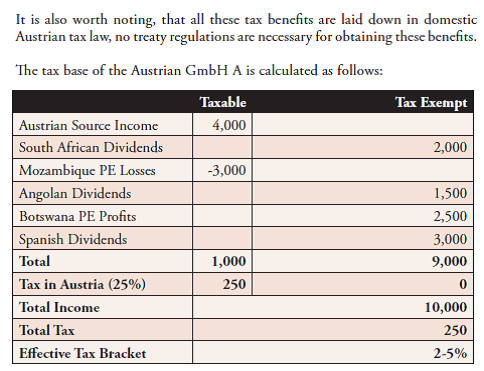