Of the Reserved Settlor and Ot…

The increased use of Offshore Financial Centres (OFCs) by multinational companies piqued the interest of many OECD countries to better understand the underlying motivation and the associated effects. This issue took on a sense of urgency in the aftermath of the global financial crisis and the fiscal challenges faced by many governments. Policymakers pointed to activity associated with these jurisdictions as possible sources of tax revenue to fill drained domestic coffers.

My academic research underscores the naivety in this approach, and argues that limiting the ability of corporations to use OFCs as conduits into the global economy will result in a decrease in onshore tax revenues – that is, the outcome will be lose-lose. In sharp contrast, enhancing the ability of companies to use OFCs as conduits will enhance their global competitiveness and generate broad based benefits for the domestic onshore-economy, including enhanced trade, employment, investment, and tax revenue.

In 2013, the Canadian government launched yet another review on the use of OFCs. In this context, it is very important for many policymakers to abandon their narrow view of OFCs and better understand the benefits they can deliver to onshore jurisdictions – including enhanced domestic tax revenue.

Canada has been transformed from a predominantly host economy to an important home economy for foreign direct investment (FDI). From 1930 through 1970, Canada received approximately C$5 of inward FDI for every C$1 of outward FDI.

This began to change in the early 1970s when both FDI into Canada (FDIC) and Canadian Direct Investment Abroad (CDIA) began to grow rapidly. However, with CDIA growing much faster than FDIC, Canada became a net exporter of capital in 1997. Ever since, CDIA has exceeded FDIC. 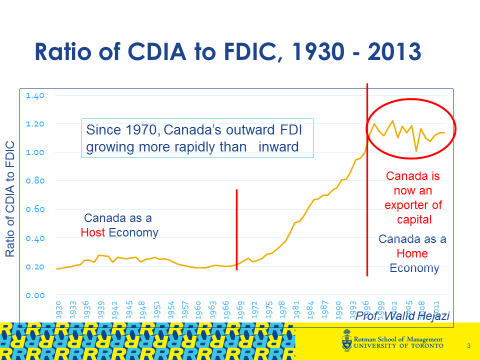 Surge in the Use of Offshore Financial Centres

A closer look at patterns of CDIA reveals the importance of OFCs in the globalisation strategies of Canadian companies. Between 1980 and 2013, the stock of CDIA increased 27 fold, whereas CDIA into or through OFCs increased 62 fold. The figure for Barbados is 5,723 only because the amount of CDIA in Barbados in 1980 was very small.

Between 1990 and 2013, CDIA grew eight fold whereas CDIA into or through OFCs increased 13 fold. Again the figure for Barbados was very large at 43.

As a result of these differential growth rates, the share of CDIA invested in or through OFCs has increased dramatically. The share of CDIA locating in the United States has fallen steadily from a high in the mid-1980s of 70 per cent to well below 40 per cent since 2010. In contrast, the share locating in OFCs has increased significantly, rising to over 20 per cent in the 2008-2012 period, but falling to 20 per cent in 2013. Barbados is the largest OFC destination for CDIA, attracting eight per cent of CDIA in 2013. 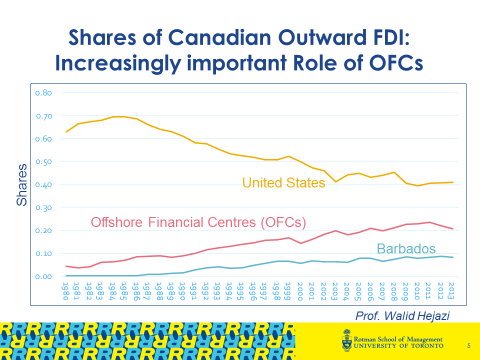 The amounts destined for OFCs are very large: in 2013, Canada had C$63 billion invested in or through Barbados, and C$171 billion through all OFCs. While some of the investment is ultimately destined for the OFC market, the vast majority is invested in the global economy, in other words, the OFCs represent conduits for Canadian business to channel resources through to access regional markets and the global economy. That is, the funds are ultimately invested in a third country/region, such as the United States, Europe, Latin America, Asia, or elsewhere.

The immediate question that jumps out is why Barbados? Why has Barbados emerged as the premier OFC for Canada?

Barbados and Canada enjoy a tax treaty which allows subsidiaries of Canadian firms to benefit by a preferred treatment for “Exempt Surplus” coming from subsidiaries located in Barbados.

But there are other reasons as to why Barbados is a preferred conduit jurisdiction. There are many differences between Barbados and other jurisdictions, including the following:

For all of these reasons, Barbados has become the third largest destination for CDIA, after the United States and Great Britain. As my research establishes, this prominence is not only attributable to the tax treaty between the two countries, but also to important cultural and economic attributes unique to Barbados for Canadian investors. Collectively they are all critical in facilitating the importance of Barbados as a conduit for international expansion and trade for Canadian companies.

Measuring the Benefits of FDI

It is widely accepted that inward FDI brings benefits to the host economy. The benefits include attracting foreign capital and technology, which enhances domestic investment and capital formation, employment, and competition, all of which work to enhance Canadian prosperity. This explains why governments globally have created policies to attract inward FDI.

Here is the heart of the question of the current research. Does complementarity continue to hold when the Canadian company uses Barbados as a conduit into the global economy?

There are many theoretical reasons to expect the complementarity effects would be higher when Barbados is used as a conduit. Canadian companies that use Barbados as a conduit experience a significant reduction in the cost of capital associated with the tax treaty. Also, given access to an attractive local environment within the OFC as described above enhances the efficiency, transparency and effectiveness of the move into international markets. These benefits offset the additional costs of moving into international markets, particularly those which are less familiar and more risky than Canada’s traditional trading partners.

The results of my most recent work on this issue are are provided in Figure 3 below. When CDIA to developed markets increase by C$1 billion dollars, there is an associated increse in Canadian exports of C$248.6 million. However, when Barbados is used as a conduit, exports increase by C$284.7. 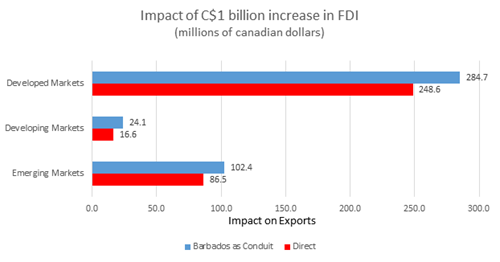 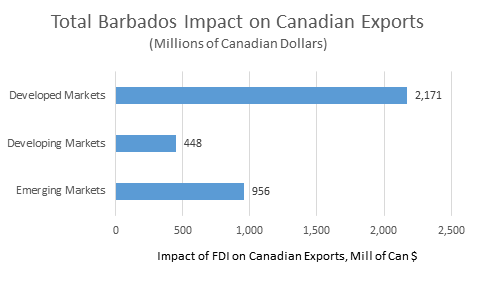 The Government of Canada estimates the employment impacts per C$1 billion of exports around 10,000 full time jobs. As such the use of Barbados by Canadian companies is associated with 26,000 to 31,000 permanent additional Canadian jobs. There are of course additional personal and corporate tax revenues that flow due to the additional economic activity associated with using Barbados as a conduit.

The key message is simply this: because a tax advantage flows to the multinationals who use conduit jurisdictions like Barbados does not mean they are bad for the Canadian economy. The analysis presented here shows that as a result of having access to these conduits, Canadian multinationals are able to be more successful internationally than otherwise would have been the case, and this has a direct and significantly positive impact on Canadian trade, employment, and hence the Canadian economy, broadly based.

These key benefits to Canada and Canadian companies must be taken into account in any public discussion of the merits of the use of conduits – having access to Barbados as a conduit to the global economy is fundamental and vital to Canada’s global business strategy. That is, Canada’s ability to compete globally, particularly in emerging markets, is directly tied to the use of such conduits. The policy discussion must go beyond any short term view on perceived reductions in Canadian tax revenue associated with their use – such a view is limited and incomplete.

Dr Walid Hejazi
Walid Hejazi is a Professor of Business Economics and International Competitiveness at the University of Toronto’s Rotman School of Management and an Academic Director at the school. His research interests focuses on Canadian competitiveness, multinational business strategies and globalization. Walid’s teaching interests are money and banking, financial economics and business statistics. His research has been published in International Advances in Economic Research, Policy Options, and the Canadian Journal of Economics, among others. He has published over 50 articles and has advised several branches of the Canadian and foreign governments on themes related to international trade, foreign investment, international tax structures and global competitiveness, and has testified five times before Canada’s parliamentary committees on these themes.

Of the Reserved Settlor and Other Anxieties of International Structures