Caribbean Offshore Financial Centres: Not All Are Created Equal

Despite criticism of IFCs and their practices in the media, Canadian FDI into Caribbean IFCs has continued at a steady pace. Dr Walid Hejazi examines the attraction of the region.

When Life Gives You Lemons: Th…

Over the past three decades, there has been a surge in Canada’s outward FDI, transforming Canada from a significant home country for FDI to a significant source country. Canada is now a significant investor into the global economy. A careful analysis of these trends reveals the importance that Caribbean offshore financial centres (OFCs) play for Canada. While the US and the UK are respectively the largest destinations for Canadian outward foreign direct investment (FDI), Barbados is the third most important jurisdiction followed by the Cayman Islands.

High profile stories of large corporations using aggressive transfer pricing strategies to shift profits to low tax jurisdictions have resulted in enhanced scrutiny by the OECD and the G20. For example, the OECDs BEPS initiative is meant to better understand and hence regulate taxation of corporate profits.

A fascinating question which arises in this environment of enhanced scrutiny is why would Canadian FDI into OFCs continue to grow at such rapid rates? Figure A below highlights the stocks of Canadian FDI into the nine most important OFCs for Canada. What emerges immediately is the growth in importance of some OFCs relative to others. For example, Barbados emerged as the largest OFC destination for Canada in 1991. Ireland also experience growth in Canadian FDI, but this fell sharply in the aftermath of the global financial crisis. The Cayman Islands has seen a similar growth trend to that experienced by Barbados, although the amount of investment in Cayman remains one-half that in Barbados. What is interesting to note also is the sharp divergence in Canadian FDI going to Barbados and to Cayman since 2011: Canadian FDI into Barbados has risen sharply whereas that for Cayman has fallen.

The immediate question that arises is, what distinguishes Barbados from other Caribbean OFCs?   To answer this question, the reasons underlying why corporations use OFCs must be considered, and even more fundamentally, why do onshore countries (ie, OECD countries) allow for such relationships to emerge? With this understanding, it will then become clear why OFCs are necessary to allow for the efficient allocation of capital globally, and hence the necessity to allow them to flourish.

Fig A: Stocks of Canadian FDI into OFCs 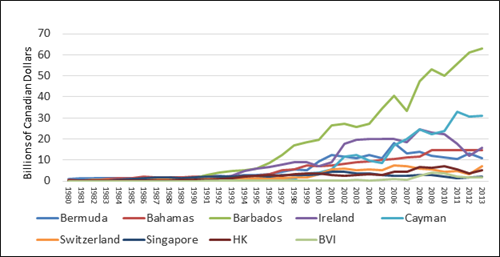 What Role do OFCs play in multinational corporate strategy?

It is often the case that OFCs are lumped together as “tax-havens”. This article will argue that such generalisations are counterproductive and miss an important benefit that OFCs can play. When used responsibly, OFCs are efficient conduits into the global economy.

It is often stated that taxation on individuals is much higher than on corporations because capital is mobile whereas individuals for the most part are not. If corporate taxes are too high, multinationals move their activities to other jurisdictions. However, corporate activity can be broken down into local activities and global activities. When Canadian banks, for example, wish to operate in Canada, it cannot therefore be argued that they would leave if taxes are too high – they must have a presence in Canada to operate there.

At the same time, onerous taxation on domestic activities may inhibit the global competitiveness of Canadian companies. Enter OFCs! OFCs allow countries to effectively segment the activities of their corporations. All profits generated domestically are taxed at domestic corporate rates. On the other hand, profits earned internationally are not subject to the same tax rates as domestic profits, at least not directly.

The preferential treatment given to exempt surplus allows Canadian companies to repatriate profits through specified OFCs free of Canadian tax. Once these profits are repatriated however, corporate stocks may experience capital gains, or the now higher profits may be paid to shareholders as dividends, or the company may invest further, or the company may hire more workers – all of which generate additional tax revenue, offsetting any tax foregone in the initial repatriation.

But there is a more fundamental effect that must be considered. When Canadian companies use Barbados, for example, as a conduit into the global economy, these Canadian companies experience a reduction in their cost of capital, and hence are more competitive and hence more successful globally than they would have been had they gone into the global economy directly. These companies are therefore more profitable and their global footprint is larger. This international success translates into more head office functions in Canada.

In addition, as Canadian companies invest internationally, this expansion serves as a beachhead of sorts for Canadian exports. The Canadian subsidiary overseas imports technology, intermediate inputs, and human capital from Canada. Furthermore, the presence of Canadian companies abroad enhances network and information flows which serve to lower the costs of doing business internationally. That is, Canadian business activity abroad serves to complement Canadian exports to those third markets.

The findings of my research conclude that as a result of the C$60 billion invested into and through Barbados, Canadian exports to the global economy are between C$2.6 billion and C$3.1 billion higher than they would have been had this investment gone into the global economy directly. The export flows are continuous, meaning they occur year over year, and are not simply one time.

The Canadian government estimates the employment impacts per C$1 billion of exports at 10,000 full time jobs. As such the use of Barbados by Canadian companies generates between 26,000 and 31,000 additional jobs in Canada. That is, OFCs, when used responsibly as conduits, have significant benefits for the home of the investment as well as OFC. The benefits to the OFC are maximised when the corporations use their jurisdictions as conduits, and when the corporations undertake substantive activities in the OFC jurisdiction. Of course, the conditions must be right in the OFC for substantive activity to occur, a point turned to below.

Not all OFCs are Created Equal!

When all OFCs are lumped together as “tax havens”, the potential benefits get lost. There is a distinction between OFCs and tax havens. According to the International Monetary Fund (IMF),[1] an OFC is a jurisdiction that;

It is very important to note, however that the OECD does not consider a jurisdiction with low or no taxes in and of itself engaged in harmful tax competition. It is not that at all. A jurisdiction would be considered to be involved in harmful tax competition when low or no taxes are combined with, for example, minimum business presence requirements, a lack of transparency, the absence of the exchange of information, and probably low regulatory controls – it is in this environment when low or no tax jurisdictions are considered harmful. The harmful nature of tax havens has resulted in tremendous pressure being applied by the OECD on tax haven governments as well as on countries that have treaties with such havens.

How are OFC distinct from tax havens?

The stated objective of the OECD (in this regard) is not to make taxes equal across countries. The reason for this is that there are several industries that are internationally mobile and are highly sensitive to tax differentials. Furthermore these are exactly the sectors that drive much of the global economy. As such, countries are quite keen on ensuring that these specific industries are not driven away by tax rates that are applied nationally. Therefore, low tax jurisdictions are very important to all countries, and this explains why during the 1980s and 1990s, almost every OECD country, including Canada, has adopted various preferential tax treaties with a low-tax jurisdiction for the benefit of their economies and industries.

The arguments made in this article therefore support the idea that when OFCs have a high standard of living, strong institutions including legal and regulatory frameworks, transparency (including a network of double tax treaties and exchange of information agreements), a highly educated work force with high levels of labour market participation, sophisticated businesses and good business standards, highly developed financial markets including the availability of credit – then these are the jurisdictions where multinationals can “hub” their international activities. Together, these characteristics yield a commitment to business of substance and discourages nameplate companies. It is in these jurisdictions where multinationals can actively manage their global operations and hence more effectively penetrate global markets. It is these jurisdictions that best serve as conduits into the global economy.

The characteristics we used to develop our index are provided in the table below. For each jurisdiction for which data is available, we develop a score on each indicator. These indicators are then equally weighted – future work will allow us to weight according to executives perceptions on the relative importance of each indicator. The results for the Caribbean OFCs are graphed below.

Only those OFCs for which data was available are benchmarked. Details of the index methodology, the data sources, and calculations will be published in full in the future.

The ranking for Caribbean OFCs is provided in the following figure. 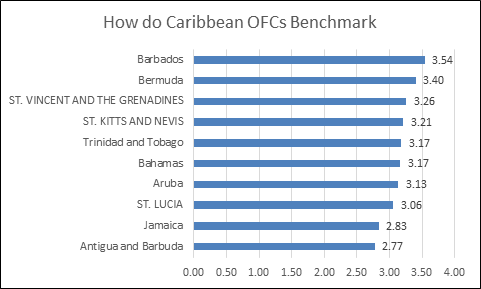 Source: The work of Zoran GrabovacRoy Wang, MBA students at the Rotman School of Management, is acknowledged. Sufficient data were not available to rank the Cayman Islands or St. Maarten.

What can be seen from the figure is that indeed all OFCs are not created equal. There is a hierarchy of jurisdictions. Barbados is ranked as the top jurisdiction on the index reported here – and this explains why it is the preferred jurisdiction for Canadian corporations, and why Canadian FDI into or through Barbados continues to grow so rapidly. Bermuda and St Vincent and the Grenadines are respectively second and third.

The increased scrutiny on the part of the OECD and the G20 will force all OFCs to enhance their quality, and with that, their measured OFC index will improve. It is also the case that this will be result in a win-win for the OFC as well as the onshore jurisdiction.

Dr Walid Hejazi
Walid Hejazi is a Professor of Business Economics and International Competitiveness at the University of Toronto’s Rotman School of Management and an Academic Director at the school. His research interests focuses on Canadian competitiveness, multinational business strategies and globalization. Walid’s teaching interests are money and banking, financial economics and business statistics. His research has been published in International Advances in Economic Research, Policy Options, and the Canadian Journal of Economics, among others. He has published over 50 articles and has advised several branches of the Canadian and foreign governments on themes related to international trade, foreign investment, international tax structures and global competitiveness, and has testified five times before Canada’s parliamentary committees on these themes.

When Life Gives You Lemons: The BVI and the Global Push for Tax Transparency