In The Chair: Dame Margaret Hodge

Celebrated Labour MP, Dame Margaret Hodge, is Chair of the UK’s All-Party Parliamentary Group on Responsible Tax which is trying to compel the Crown Dependencies to follow the agreement by Overseas Territories to introduce public share ownership records by December 2020; a move which all three territories are resisting. British MPs are yet to vote on this amendment to the Financial Services Bill after the government cancelled the previously planned debate and votes. The APPG Responsible Tax argues that greater transparency over company ownership is an important tool in tackling money laundering, tax avoidance and tax evasion. The Crown Dependencies, however, claim that the amendment is unnecessary due to the already robust approach to the retention and sharing of beneficial ownership information. They also assert that the Westminster Parliament is challenging their sovereignty and cannot legislate for them on domestic matters without their consent. In this Economic Report Q & A with Dame Margaret Hodge, she reveals that the Group has no intention of withdrawing their amendment and rebuts the claims made by the CDS. 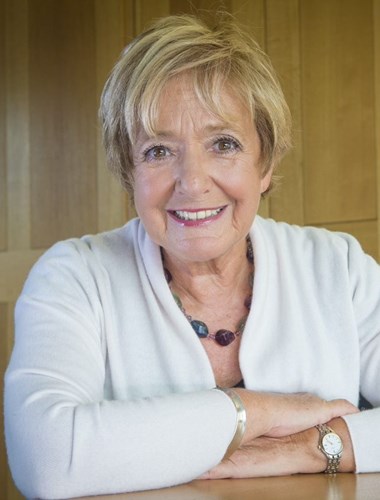 ER: The Sovereign State is a legitimate form of self-rule in which state law claims it has final authority over matters within its territorial jurisdiction.  How legally valid is the push from UK politicians to demand that another jurisdiction changes its laws and what is your reaction to the Crown Dependencies’ vocal and well publicised argument that it is not for the UK Parliament to dictate how they are regulated?

DMH: I think they are talking nonsense; we have very strong legal advice that we are meeting all constitutional proprieties. Clearly one would prefer that the Crown Dependencies came willingly to the table to introduce greater transparency. That is why Andrew Mitchell (Conservative Party MP and Vice-Chair of the APPG Responsible Tax) and I visited all three jurisdictions to discuss the values that underpin what we are trying to do which is to ensure that there is true transparency and to use transparency as a tool to fight aggressive tax avoidance, money laundering and other financial crime. It’s in the interests of the UK that we should be challenging the abuse of the UK’s jurisdictions by those who try to bring dirty money into Britain.

ER: What was the response and outcome of your discussions with the three Crown Dependencies?

DMH:  We met with both government representatives and wealth management practitioners and had an exchange of views. Our mission was to persuade them to come willingly along with us in the legislation that is being introduced in all the British families except for the CDs. We both felt that among the elected representatives, there was a more understanding response than there was from the wealth management industry.

ER:  You have called for tougher action on legal and financial advisors and for the government to “make them more culpable than they currently are”. What measures are you proposing in this regard?

DMH: When you look at a lot of these tax avoidance schemes that are often ruled out by the HMRC further down the line, they are always launched by advisors and underwritten by lawyers before they are marketed to individuals and those advisors and lawyers are never held to account for advice which is later found to be unlawful. I think that’s wrong. At the end of the day, the people who actually face the bill and the consequences are their clients. I believe all the advisors who are engaged in this practice, including banks, accountancy firms, wealth management advisors and lawyers, need to be held to account for the advice they give.

ER: Do you mean financial or legal accountability?

DMH:  Not financial accountability but if they advise their clients to invest their money in schemes that are found to be unlawful, they currently get away scot free and I don’t think that’s right. I think they should be held to account for the advice they give.

ER: When is the Financial services bill amendment likely to return to parliament and why do you think it was previously pulled from the House of Commons?

DMH:  That decision is in the hands of the UK government; they only withdrew consideration because they knew that we would succeed in getting our amendment enacted. We had widespread support across the whole of the House. They need to bring the legislation back if Brexit is to succeed (the Hodge-Mitchell amendment is a piece of Brexit-related legislation) and we are waiting for them to do that. I think their behaviour in withdrawing the legislation, because they knew they would be defeated, has only served to harm opinions in the House rather than make people question the legitimacy of our amendment. We also believe that we have public support for the amendment because everyone feels that everyone else should pay a fair tax on their wealth, their profits and their earnings; if you are extremely wealthy or a global corporation you should not get out of your obligation to pay a fair rate of tax on the money you earn or hold.

ER: Do you believe you have the support of corporate entities in your pursuit of regulations and has there been any formal lobbying in this regard?

DMH: It depends who you talk to, doesn’t it? Those corporations who think they face unfair competition because there are global corporations who arrange their financial affairs in such a way for no other purpose than to avoid tax, thus allowing them to reduce prices, feel that the competition is imbalanced; for example, Amazon vs John Lewis. I have been working in this space for approximately eight years and although there has been no formal approach from the likes of the Confederation of British Industry (CBI) or other representative bodies, l I have had lots of discussions about these issues and talk to all of these organisations regularly about a fair tax system.

ER: What legal or other action can the APPG Responsible Tax now follow to achieve its objectives and to achieve the tax transparency that you require?

DMH: Obviously in the best of all possible worlds, we would persuade the CDs to come willingly to the table and to adopt the same standards the rest of the British family have adopted or are going to adopt; we would much rather have consensus on the issues involved. We are active internationally in attempting to achieve greater international acceptance of transparency being a key tool in fighting economic crime and tax avoidance.

ER: The Crown Dependencies have indicated that they will establish public registers of ultimate business ownership when it becomes “the global norm”.

DMH: They are just adopting a waiting approach whereas we say that Britain, under David Cameron in 2012, vowed we would take a leadership role in this regard, which is why we are cross-party here in the UK. We need to make sure that what we committed to in the UK government (and indeed Europe) is now enacted and we warmly welcome the European Union’s Fifth Anti Money Laundering (5AML) directive for public registers, to which the UK government has also agreed. But the CDs say they will come in at the end and not at the beginning which is, in our view, not good enough. Andrew Mitchell articulates this by comparing it to the fight against malaria – you don’t say ‘I will only fight malaria in my country after it’s been eliminated in every country’. Eliminating it in certain jurisdictions makes it easier to focus on the same elimination in the remaining jurisdictions. I have absolutely no doubt whatsoever that transparency is, and will continue to be, increasingly recognised as an essential tool in the fight against tax avoidance, tax evasion, money laundering and other economic crime. It’s all a question of time.

ER: What are your views on the UK Government’s proposal to extend the public register date for Overseas Territories from December 2020 to 2023?

DMH: We find that totally unacceptable; it is a deliberate misinterpretation of what parliament intended. We’ve had a meeting with Ministers, and we will, in the course of moving the amendment that brings Crown Dependencies into the frame, be making it absolutely clear that the will of parliament is that registers should be ready to go by 2020.   The OTs and the CDs say that the registers already exist, and they are used – the argument at the moment is that they are not open and are only used by enforcement agencies - so there isn’t an argument as to why they cannot be open by 2020. We conceded to the argument put to us by Ministers at the time that, due to the havoc caused by the terrible hurricanes in some OTs, such as BVI, we should allow additional time over and beyond the 5AML directive deadline of 2019; we gave an extra year but that was due to particular circumstances. We see no good reason to go beyond the end of 2020 for both OTs and CDs.

ER: What is your plan of action should the amendment to the Financial Services Bill not be returned to the House of Commons?

DMH: On the assumption that we are going to Brexit, the bill will have to be brought back as it is essential for the implementation of Brexit. If, for some reason, it is not brought back, we will find another legislative slot to introduce the same amendment and the government knows this. In the interim, we intend to carry on our encouragement to all international bodies to create global transparency. We want country by country reporting, for example, plus additional measures to improve transparency and ensure that jurisdictions guarantee that whether you are an individual or a corporate entity, you pay a fair amount of tax in the jurisdiction in which you live and the jurisdiction in which you carry out economic activity and earn your profits. We are involved in a whole range of activities to achieve this result; the finance bill amendment is not the only show in town.

ER: Do you recognise that International Financial Centres have a valid and important role to play in cross-border finance?

DMH: We do recognise that and if it’s legitimate business, they can carry on doing that. Indeed, if they want to remain low tax jurisdictions they can continue to do so - as long as it remains totally legitimate and above board and does not involve any of the individuals or the corporations from using financial structures for no other purpose than to launder money or avoid or evade tax. Carry on! If they are attractive because they are low tax jurisdictions so be it. I don’t agree with it but it’s perfectly legitimate.

BELOW: Read exclusive responses from Jersey's Senator for External Relations, Ian Gorst, and expert on the constitutional law of the Crown Dependencies, Professor Peter Edge.

Can the UK Legislate for the Crown Dependencies?