Back to the ‘New Normal’ future: Covid Reinforces Imperative For IFCs To Collaborate In Fight Against Common Threats

Unprecedented is an overused and all-too-often abused word. It is commonly deployed to describe anything from sporting triumphs through to company financial results or reality television celebrity antics. Indeed, the severity and nature of the global financial crisis of 2007-9 is often written about as if it were without comparison – even though the 1930s saw a deeper economic retrenchment and there is typically a credit crunch somewhere once every two years.

But, socially, economically and politically, the COVID-19 pandemic is truly unprecedented.

We’ve never before witnessed globally synchronised closure of multiple industries. We’ve never had governments step in so quickly and with such scale to prop up a wide range of private sector businesses and jobs. We’ve not before been subject to such a heavy brake on mobility and personal liberty, at least in the ‘Western world’, outside of wartime. And, we will likely never again see economic ‘growth’ data as bad as in the second quarter of this year – nor will our children. 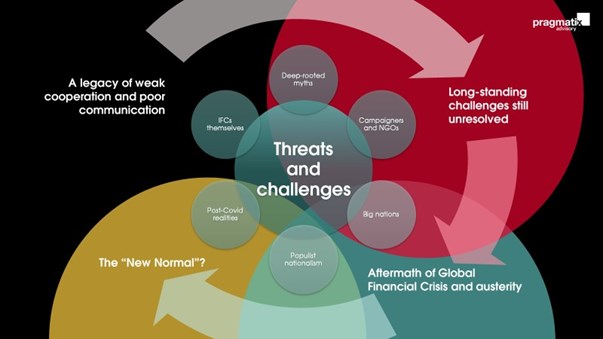 Two trends from the 2008 global recession that proved dangerous to IFCs will emerge from the COVID lockdowns reinvigorated.

First, big nations will be even more concerned to maximise their tax receipts – and to be seen to be maximising them. Havoc has been wreaked on government coffers that were only just recovering from the financial crisis more than a decade earlier. The Westminster administration, for example, will have spent around £135 billion on emergency measures by the end of this year while their revenues will have been knocked back by a further £130 billion because of the deteriorated economic climate. The respected Institute for Fiscal Studies predict a level of public debt by 2024/25 equivalent to a full year of national income on their ‘central scenario’ – and more like 120 per cent of annual gross domestic product if there’s a second wave of the virus. This compares to a high of 86 per cent in the years after the 2007-9 crisis. (But it’s not unprecedented. Debt reached over two-and-a-half times national income in the aftermath of the second world war.) 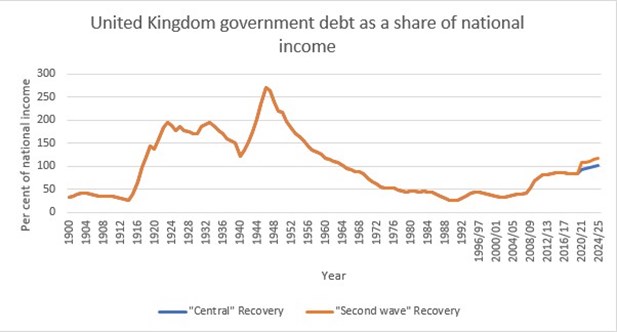 With ‘austerity’ banished from the political vocabulary, the post-pandemic fiscal squeeze will have a new rhetoric and, comforted by almost invisible interest rates, politicians will spend more now, especially on infrastructure and capital works as well as health and social services, than they did a decade ago.

Nevertheless, national budget equations remain unsolvable without medium-term tax hikes; expect higher business taxes, fewer tax breaks for entrepreneurs, investors and pension contributors, increased property taxes and a renewed focus on higher income households. Politicians will double down on tax avoidance (or where there’s the perception of avoidance), with the net thrown widely to cover anyone not seen as contributing their ‘fair share’. Big nations will not take kindly to tax competition from smaller jurisdictions. Sound familiar?

Second, globalisation is slowing down and even reversing. Unsurprisingly, trade between nations has been knocked back by COVID and during the lockdowns. As the graph illustrates, the value of goods and services imported and exported has dropped markedly this year. 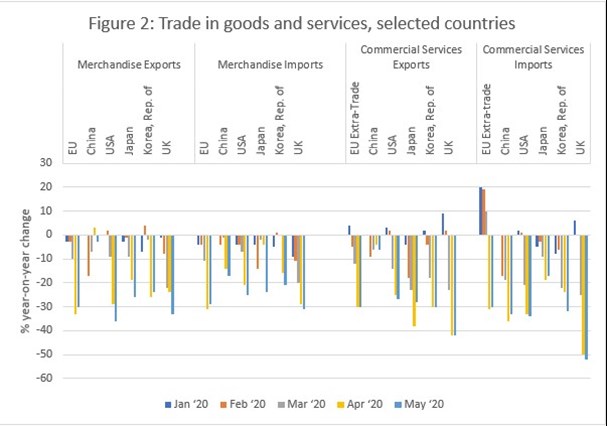 The pandemic will cause longer term damage too. It has highlighted to businesses the fragility of stretching ‘just in time’ supply chains across geographically distant locations, and to governments, the risks of reliance on foreign supplies. Lack of personal protective equipment became an almost daily criticism of government. With the United States accused of commandeering shipments of masks bound for Europe back in April, or securing the world’s entire stock of the drug Remdesivir in June, and the United Kingdom reliant on Turkey to produce adequate volumes of surgical masks and gowns at the height of the crisis, there will likely be calls for greater domestic self-sufficiency in the manufacture of critical goods.

But COVID has the potential to supercharge the recent tide of ‘populist nationalism’, which brings anti-globalisation sentiment into the political mainstream. President Trump’s rally cry of taking down ‘the establishment’ speaks to a base that has been largely left behind because of globalisation and international competition. The frustrations of the working class and the ‘squeezed middle’ in developed countries has seen significant support for populist parties in Hungary, Austria, Switzerland, Denmark and Belgium amongst others in recent years. Even in the Netherlands, France and Germany, politicians seeking to reverse their countries’ internationalist agenda have been close to breaking through at elections. In the United Kingdom, referenda and elections have been won and lost on immigration and sovereignty. The closed or restricted borders necessitated by the pandemic serve to amplify the calls, while the origins of the virus provide further validation for those seeking to disengage politically and economically from China (although Beijing’s activities in Hong Kong provide plenty of justification alone).

This global pandemic has cracked open the fault lines in today’s international architecture. The post-war multilateral organisations, like the World Health Organisation, have been close to impotent. The now 27 members of the European Union have struggled to negotiate a mutually acceptable support mechanism – and what they have agreed has been tardy and half-hearted. Individual countries (and even their sub-national administrations) in Europe and beyond have gone their own way in response to the emerging public health and economic crisis.

In some ways, this new fractious and fragmented global polity could be seen as blessed relief for IFCs. An international community that can’t work together will find it harder to gang up on the small jurisdictions. Indeed, the big nations’ approaches to cross-border tax may even begin to diverge. But this perspective misses the bigger picture. The past success of offshore finance has been built on decades of growing globalisation – so a future environment that is less conducive to cross-border trade, international investment, or globally mobile employees and families will be tougher for the islands and their businesses.

As governments and businesses in IFCs navigate the ‘new normal’, they will continue to be impeded by long-standing reputational problems that have remained unresolved for decades.

Newspaper editors cannot resist placing images of palm trees and white sandy beaches next to their stories of supposed tax havens – and nor can the European Commission. Self-styled ‘tax justice’ campaigners pedal false claims about secrecy and money laundering. Well-intentioned NGOs misinterpret complex trade and investment statistics, and misunderstand the important role played by IFCs in mediating much needed investment into developing economies. And policymakers in big countries all-too-often believe that there is no economic, fiscal or electoral downside to them hitting out at offshores. 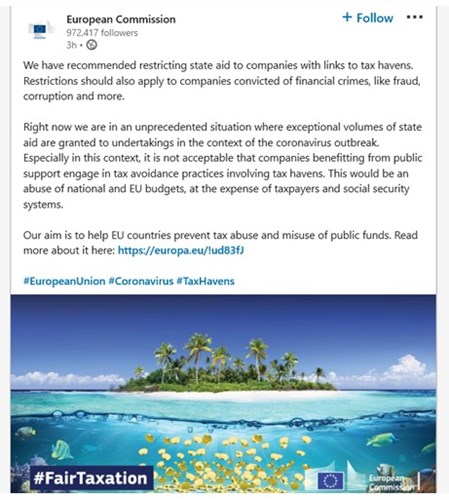 STAY DIVIDED AND BE CONQUERED

There’s no point in blaming the newspaper editors, the European Commission, the tax justice campaigners or the NGOs for the years of misinformation and condemnation. Over the decades, the IFCs themselves have done too little to defend or explain what they do. ‘Keep your head down and hopefully it will all blow over’ was the strategy for many not that long ago – partly reflecting a lack of confidence but also a lack of resource on the islands.

More recently, some IFCs have adopted a more proactive and engaged approach. There have been some successes, with the likes of Jersey Finance and BVI Finance building authoritative evidence-based arguments to take constructively to decision-makers and opinion-formers at the highest levels. David Cameron’s government made a volte-face once they saw the evidence on the benefits to Britain’s economy of the IFCs.

But much more will be needed to overturn the decades of entrenched prejudice against the jurisdictions founded on tax haven myths that went too long unchallenged. A concerted and continued campaign is needed in London, Brussels, Paris, Washington and beyond to inform and re-educate policymakers, and to counter the widespread but inaccurate tax haven rhetoric in the media and elsewhere. The scale of effort required is practically beyond the resources of any one jurisdiction. Cooperation between governments, and across the industry, is needed.

It is time to dispense with any sibling rivalry. The IFCs need to work together for their mutual benefit – indeed, for their survival in this new but familiar normal.

Rebecca Munro
With a focus on islands and IFCs, Rebecca works on a wide variety of Pragmatix Advisory projects, especially those with a social, economic or public policy dimension. She is an active member of her community on the Isle of Mull. She led the first successful community purchase of land, the Isle of Ulva, under new Scottish legislation and has spearheaded the building of new affordable homes for islanders. Rebecca holds a first-class honours degree in politics, philosophy and economics from the Open University, which she earned while owning and managing her own hospitality business.

Mark Pragnell
Mark Pragnell, director of Pragmatix Advisory, has over 25 years’ experience as a macroeconomics consultant and forecaster. He has worked with a number of IFC governments, promotional bodies and businesses, and has led seminal research to explain and quantify the value of IFCs.

Reopening The World: Asia And IFCs Are The Key To Economic Recovery

Staying Ahead of the Curve in an Age of COVID-19