Three Years After The EU Blacklist Arrived, What Has Changed?

In the waning days of 2017, following several years of development, the European Union published a list of 17 ‘non-cooperative jurisdictions’ that it had determined posed a risk to the tax bases of its member states. Alongside this ‘blacklist,’ the EU also released a ‘grey list’ of 47 jurisdictions that had pledged to address deficiencies in their tax systems by the end of the following year.

The listing made a lot of people very unhappy. Non-governmental organisations who had been pushing for more stringent measures against offshore jurisdictions felt that the list had eschewed some of the biggest offenders. Conversely, many of the listed governments complained that the exercise seemed arbitrary and overly-punitive. Everyone pointed out the awkward fact that EU member states themselves were exempt from the naming-and-shaming. Despite the furore, over the following years the EU has remained steadfast in its insistence that the blacklisting exercise has led to real, measurable improvements in international tax governance and towards ending abusive tax practices. 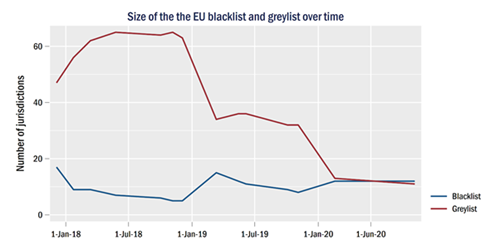 Since December of 2017, over 74 jurisdictions have passed through either the black or the greylist. Whether one agrees with the EU’s approach, it’s important to understand how effective the exercise has been. The EU set out criteria that it expected listed jurisdictions to meet, including adherence to new transparency regimes such as the Common Reporting Standard for Automatic Exchange of Information (AEOI) or the OECD’s Base Erosion and Profit Shifting project (BEPS). Many of these policies have been shown to reduce the scope for people to evade taxation or for multinationals to engage in tax avoidance. If the listing nudged more jurisdictions towards better tax governance, these are real benefits that have to be counted against the costs of compliance.

The EU first attempted a blacklist in 2015 when it released a list of jurisdictions that featured on at least 10 of the lists maintained by its member states. This opaque, somewhat haphazard approach was met with some derision in the media as well as pushback from the OECD. An effort to come up with a new, technically-sound list was led by the EU’s Code of Conduct Group for Business Taxation (COCG), who were initially tasked with drawing up a set of criteria for figuring out which jurisdictions it should prioritise for review.

In 2016, the COCG released its criteria which centred on three main outcomes: how closely each jurisdiction was economically tied to the EU; their overall level of financial activity; and finally how stable each jurisdiction was, as measured by the World Bank’s Worldwide Governance Indicators. After ranking 160 jurisdictions according to these three criteria, the COCG selected only approximately half of those that exceeded a certain threshold in all three categories, then focused its attention on these for the listing process that happened the following year.

Ahead of the listing process, the Code of Conduct Group communicated with jurisdictions that it felt had deficiencies that put them at risk at facilitating tax evasion or avoidance. Those who were unable to meet or commit to meeting the COCG’s standards were eligible to be included on the very first edition of the new blacklist. Of those that were originally selected for screening, 15 per cent were included on the first blacklist released in December 2017, and 50 per cent were included on the greylist of those that had committed to concrete changes by the end of 2018.

The jurisdictions that were included on the list have all made progress towards both AEOI and the BEPS agenda in the past few years. The EU touts this as a success, but to truly understand the impact of a new policy, one can’t just look at jurisdictions that were directly affected by it; you also need to track a counterfactual group of those that weren’t. This is particularly important during a time where there is intense global pressure on all financial centres to adopt these standards.

To understand that impact, I exploited the convoluted EU selection process, comparing jurisdictions that barely scored high enough on the three criteria to those that barely missed out on being selected. The advantage this approach has is that these jurisdictions are very similar in many respects, other than some were lucky (or unlucky) enough to be considered for selection on the blacklist. I then collected data on how each jurisdiction is performing on a wide variety of international tax outcomes, ranging from its adoption of Automatic Exchange of Information (AEOI) to BEPS-related outcomes such as being reviewed for harmful tax regimes or adoption of Country-by-Country Reporting (CbCr). I wanted to know if, three years later, jurisdictions that were subject to the EU’s scrutiny were really more likely to have adopted these standards.

The EU Blacklist Moved The Needle In Some Areas, But Not In Others

The results suggest that the EU blacklisting exercise has had a substantial effect in some policy areas, but not in others. Its greatest success has been inducing several jurisdictions to join the Inclusive Framework on BEPS; selected jurisdictions were at least 70 per cent more likely to have joined the body by 2020. More conservative estimates suggest that the Inclusive Framework is 15 per cent larger as a result of the blacklisting exercise. This will increase the number of jurisdictions committed to eventually embracing the BEPS Minimum Standards.

The second area where the EU’s intervention has made a big difference is in increasing transparency around preferential tax regimes. Selected jurisdictions were 70-90 per cent more likely to have had their preferential tax regimes inspected and, following possible amendments, found not harmful by either the EU or the OECD’s Forum for Harmful Tax Practices (FHTP). Part of this increase in transparency was driven by the involvement of the EU’s COCG itself, but also the fact that jurisdictions pushed to join the Inclusive Framework were then eligible for review by the OECD’s FHTP.

Finally, there is some evidence that the EU selection and listing process may have had a modest impact on the number of jurisdictions whose exchange-of-information on request (EOIR) regime received a “compliant” or “largely compliant” rating from the Global Forum on Transparency and Exchange of Information For Tax Purposes. However, there is little evidence that selected jurisdictions were more likely to commit to exchanging under the Common Reporting Standard for AEOI by 2023, nor were more likely to exchange with EU countries.

There is also scant evidence that the EU successfully moved the needle on several of the BEPS Minimum Standards, with selected jurisdictions no more likely to adopt country-by-country reporting to implement the Multilateral Instrument. There is also no evidence that selected jurisdictions were more likely to be members of the Global Forum, nor to have signed the Multilateral Convention on Mutual Administrative Assistance, despite both being common deficiencies communicated by the EU Code of Conduct Group.

The Limitations Of The Blacklisting Process

Recent research by Aija Rusina of the Norwegian School of Economics revealed that the initial release of the EU’s blacklist led to a significant drop in the stock market valuation of multinationals doing business in affected jurisdictions. Both markets and the media seemed to expect that the blacklists would have seismic effects. Yet, while it may still be too early for the effects of the listing to appear in macroeconomic statistics, to date there have been no detectable changes in foreign-direct investment or offshore deposits in listed jurisdictions.

One of the reasons for the muted policy and economic response may be the fact that there is mixed evidence that the EU was quick to implement many of the ‘counter-measures’ with which it threatened affected jurisdictions. Affected jurisdictions are now ineligible for acting as conduits for funds from either the European Fund for Sustainable Development (EFSD) or the European Fund for Strategic Investments (EFSI), but it is unclear what proportion of these funds travelled through offshore financial centres in the first place. In addition to this, tax authorities in EU member states tentatively agreed to subject blacklisted jurisdictions to extra scrutiny. But in practice, many authorities continued to use their own internal blacklists in addition to the EU-wide list.

Another factor may have been slow implementation of the hurdles jurisdictions had to clear to stay off the blacklist. The Code of Conduct Group only began monitoring the implementation of the BEPS Minimum Standards last year, and before last summer it also set lower thresholds for passing its exchange-of-information targets.

However, the EU and its member states have signalled plans to make the blacklist more potent. Starting in 2021, member states will be required to use the blacklist to apply at least one of several defensive measures, ranging from CFC rules to withholding taxes. In addition to this, several European countries have announced that firms with subsidiaries in listed jurisdictions will no longer be eligible for COVID-19 relief programs.

As of October this year, the number of jurisdictions on the blacklist has shrunk to only 12. Yet the EU has signalled its plans to start making its criteria for compliance more stringent and will begin to expand the screening process. As the goalposts begin to move, it is likely that the world will continue its slow march towards better international tax governance.

However, there remain two major gaps in the listing process. The first is the United States, which has repeatedly refused to meet the EU’s criteria on automatic-exchange of information. The second gap is EU member states themselves, who have enjoyed a “get out of jail free” card for three years with little sign that things will change in the near term. Until the EU decides to give its own compliance with international standards the same scrutiny it subjects other nations to, what has always been put forth as a technical list will remain a political one.

Matthew Collin
Matthew is the David M. Rubenstein Fellow at the Brookings Institution. He specialises in development economics and illicit financial flows.