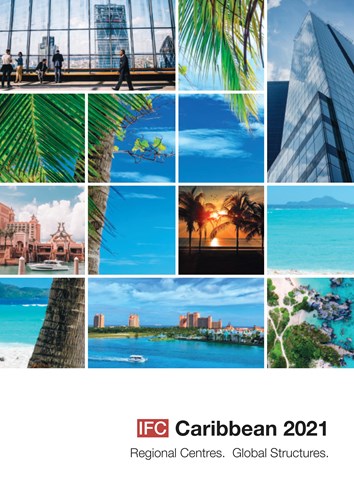 It has been another year of challenges, opportunities, and developments in Barbados, Bahamas, BVI, Antigua, Cayman Islands, and Bermuda, and the region as a whole.

Fortunately, the Caribbean IFCs are experts when it comes to transformation. They rightly pride themselves on their ability to adapt and innovate, despite the ongoing offensive of regulatory demands that come their way via the dictates of the EU and the OECD.

This coming year will be no exception. The OECD recently announced the introduction of  the controversial global minimum tax on multinational companies with annual revenues of at least €750million in a bid to prevent them from shifting profits from high-tax to low-tax jurisdictions. The resulting economic damage on the global economy and on IFCs in particular is still to be assessed. As Julian Morris explains in his excellent analysis, most jurisdictions already have measures in place to prevent such profit shifting, the detail of the new legislation is still to be finalised, and some jurisdictions are refusing to cooperate. As we went to press, the agreement was due to be debated further at the G20 meeting in Italy in October but certainly, the jurisdictions featured in this Review are confident that, once again, they will survive and thrive despite yet more obstacles being launched in their direction.

In other developments, the Financial Action Task Force and its continued enforcement of blacklists in the Caribbean has come under fire, with Anthony Travers labelling it “a hopelessly flawed organisation” and “a French farce”.  And Alicia Nicholls maintains that its practices are having unintended consequences for Caribbean IFCs including de-risking, reputational damage, and high regulatory costs.

What detractors seemingly fail to comprehend is that Caribbean-based IFCs are about so much more than competitive tax rates. As our jurisdictional round-up demonstrates, they are, in fact, global business hubs and their value lies in offering high value services to a sophisticated, mobile investor base. Barbados, as our article by Derrick Cummins explains, is a world leader in captive insurance while Sir Trevor Carmichael outlines plans for growth in FinTech and arbitration services. BVI is the go-to jurisdiction for the incorporation of companies. The Bahamas was the first major common law jurisdiction to introduce foundations. Antigua and Barbuda is renowned for its ground-breaking Citizenship by Investment Programme. Bermuda, according to the article by John M Huff, is emerging as the world’s climate risk capital. The Cayman Islands offers advanced expertise in trusts.

This is why Caribbean IFCs will continue to endure and flourish. 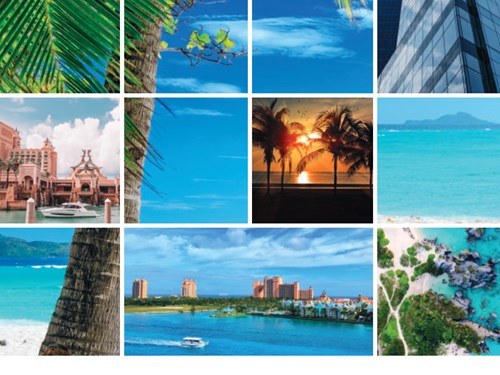 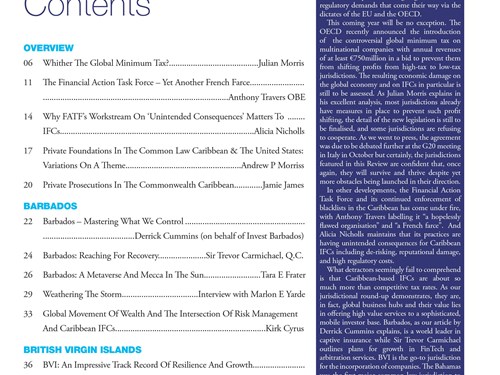 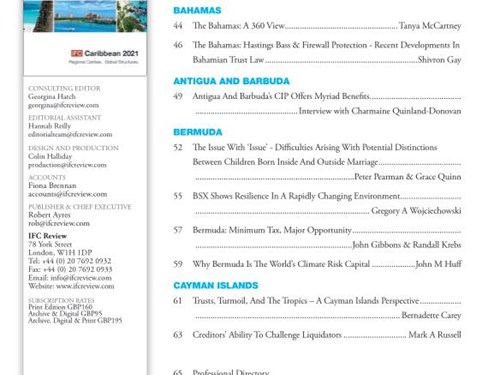