The Global Financial Centres Index (GFCI) developed from a piece of research on the competitiveness of financial centres that Z/Yen Group undertook for the City of London in 2005.

Taxes On Wealth – The Global L…

Previous research compared a small number of centres, typically just London, Frankfurt, Paris, and New York. Financial centre strength was already widely distributed at that point, and Z/Yen developed the GFCI to offer a dynamic measure of the strength of financial centres across the world. The first edition of the GFCI was published in 2007. In September 2021, Z/Yen published the 30th edition of the index, which is updated twice a year.

The GFCI is a factor assessment index that combines two distinct sets of data to create a rating for financial centres:

In 2007, GFCI 1 provided ratings for 46 financial centres, including just two IFCs – Cayman Islands and Bermuda. GFCI 30, published in September 2021, provides ratings for 116 financial centres worldwide, including all the major IFCs. This increase reflects the continuing development of the world economy and the extension of financial services to larger groups of the population. It also reflects the decisions of many cities and jurisdictions to plan the development of new financial centres to assist with economic development. In some cases, this includes the establishment of separate legal and regulatory systems outside the local jurisdiction.

The COVID-19 pandemic continues to have a major effect on the world economy. In GFCI 30, the overall average financial centre rating fell 12.9 points (2.05 per cent). While a small change, this is the third consecutive fall in the average rating. This suggests that there remains a lack of confidence in the world economy. The fact that overall ratings continue to fall against the levels that we saw in 2019 reflects the continuing uncertainty around international trade, the impact of the COVID-19 pandemic, and geopolitical and local unrest. Asia/Pacific centres generally fell in the ratings in GFCI 30, and assessments from people based in Asia/Pacific suggest that they judge Chinese centres less favourably than before. This might suggest that the economic gains in the region arising from COVID-19 may be levelling off. North American centres performed well. This is likely to reflect renewed optimism about the US and Canadian economies as they move forward from the pandemic.

The relatively strong performance of New York and London suggests that the financial services sectors in these cities managed to sustain their performance despite radical changes in working practices during the last 18 months.

Other headlines from GFCI 30 show that:

IFC Performance In The GFCI

Chart 1 shows the GFCI ratings for IFCs over the five years from 2017 to 2021. The trend is on average downwards, and while there has been a fair amount of volatility in ratings in recent editions of the index, all centres in the group have fallen in the ratings in GFCI 30 following a slight rally in GFCI 29. Two of the traditional leading IFCs over this period - Cayman Islands and Bermuda - have fallen sharply in recent editions of the index, with Jersey now leading the group.

Chart 2 tracks the ranking of IFCs over time. The average rank of IFCs in the GFCI has fallen steadily as more financial centres have entered the index. Despite improvements in GFCI 29, all IFCs have fallen in the rankings in GFCI 30.

GFCI 30 reflects, in part, the impact of the variation in recovery from the COVID-19 pandemic in different regions. As noted above, North America has performed well in GFCI 30, and Asia/Pacific less well. However, there appears to be a lack of confidence in IFCs’ positioning as the world economy shifts as a result of the pandemic.

While IFCs have fallen back in the overall rankings, there are sectors where they generally perform better than the overall position. In the GFCI, we produce sub-indices using the same model as the main index but using only responses to the questionnaire from people working in different sectors of finance. In the sub-indices covering investment management, professional services and FinTech, IFCs generally rank higher than their overall ranking as shown in table 1, with in each case only one centre ranking lower than its overall ranking in the GFCI. The message from these results is that IFCs will continue to prosper in focusing on areas where they have a track record and good reputation. 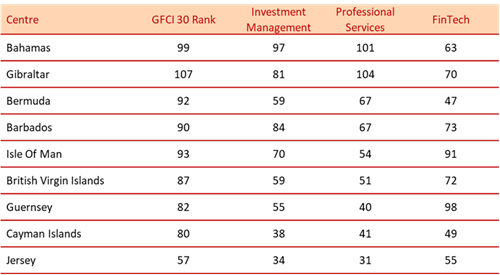 We also produce sub-indices based on groups of instrumental factors – the areas of competitiveness in the GFCI. As table 2 shows, IFCs are generally weaker in the sub-indices relating to Business Environment and Reputation & General measures. These are areas in which it may be difficult for IFCs to compete with larger centres.

Table 2 | IFC Performance In The Areas Of Competitiveness Sub-Indices

When looking at relative assessments, for most IFCs the assessments given by respondents from Western Europe are higher than average. Western Europe accounts for 40 to 50 per cent of the responses provided to European IFCs and 20 to 25 per cent of responses for Caribbean centres. This shows a higher reputation for offshore centres in Western Europe, perhaps due to their understanding of the role of IFCs and historical links with the onshore financial system.

These results offer an opportunity to IFCs to consider building better connections with Asia/Pacific financial centres and to look for business partnerships in the region. Asian countries continue to expand their economies. This has provided growth in trade and investment finance in the region, including a demand for wealth management expertise. IFCs may be well placed to operate in this environment.

In discussion with financial centres across the world, four themes repeatedly emerge:

In addition, IFCs are facing the currently unknown impact of global moves to introduce a minimum corporate tax rate. This may lead IFC jurisdictions to look at new ways to structure tax efficiency, depending on the final shape of the proposals and the scope for the allocation of taxing rights.

Through the GFCI and Z/Yen’s other indices - the Global Green Finance Index and the Smart Centres Index, we will continue to track the trends. Success in these areas is likely to mark out the financial centres of the future and IFCs will need to position themselves to address these areas and to continue to in the specialisms in which they excel.

Increasingly, financial centres are working together to build regulatory, trade and commercial alignment. The better-connected centres are, the more likely they are to succeed. There is enormous scope for specialist centres to bring their expertise to bear in such partnership activity.

As the economic recovery from the COVID-19 pandemic continues, there is a continued shift to digital commerce and the expansion of financial services to those who have traditionally not been served by the financial system. There are opportunities in these areas for IFCs and Z/Yen will continue to follow the development of finance and the role of IFCs as part of the global financial system.

Mike Wardle
Mike Wardle is Chief Executive Officer for Z/Yen, managing work on the development and delivery of the Global Financial Centres Index, Global Green Finance Index, and Smart Centres Index. Mike worked as a civil servant for almost 20 years mostly within the field of education policy. He was a director and then Chief Executive of the General Social Care Council, establishing the regulation of social workers. Mike's career moved into consultancy, programme management and coaching and he worked with Z/Yen for six years delivering programme management services to the Church of England, Unison, and the Royal Marsden NHS Foundation Trust and Chelsea and Westminster NHS Foundation Trust before taking up his current role.

Taxes On Wealth – The Global Landscape