STEP’s “Evidencing The Social And Economic Benefits Of Trusts” Report

Trusts have a longstanding foundation in the English common-law tradition, but they appear to remain subject to an external perception that they are available only to the super-rich or are used to hide assets or for other improper, if not outright illegal, purposes.

Financial Symbiosis And The Ra…

Most of the factual, thoughtful or philosophical articles, essays and reports about trusts open with historical anecdotes. This is not a quaint narrative artifice: it is a testament to their resilience and longevity. It shows an enduring reliance on the concept of trusts whose origins are deeply rooted in principles of fairness and equity. Predicated on the protection of familial interests, they may seem irrelevant to the public. In reality, a material proportion of the population in the UK, for example, is likely to comprise beneficiaries of trusts, principally in the form of trust-based pension schemes.

As private legal arrangements, it can be difficult to source quantified, empirical evidence about the uses of trusts and the benefits they bring, both economically and socially.

The counter-evidence where trusts have been used for improper purposes or where trustees have abused their powers is more readily available and quantified. The story, often sensationalised, is based around those few cases that come to public attention.

In January 2021, STEP published its “Evidencing the social and economic benefits of trusts” report[i]. The purpose of this work was to draw together existing evidence and research about the ways in which trusts can be, and are, used for wider societal benefit and how they impact every facet of society.

In part, the report is about improving understanding and addressing common misconceptions, both by presenting the positive evidence base and by shining a light on how and why trusts are used.

What Is A Trust?

As shown in the diagram below, a trust generally involves three parties: the settlor (or grantor) sets up the trusts and commits to formally gifting certain assets into the trust. The trustees assume the job of managing and overseeing the trust assets for the benefit of the current and future beneficiaries. The trustees have a fiduciary relationship with the beneficiaries so they are obliged to put the beneficiaries’ interests above their own. They are also the legal owners of the assets in the trust. 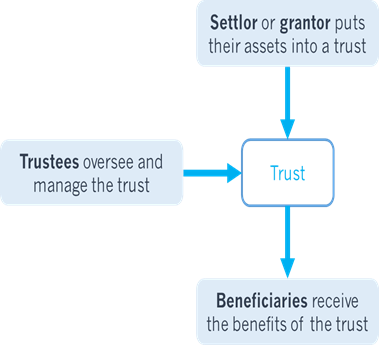 Trusts provide flexibility and control over where, when and how an individual’s assets can be used to provide a financial benefit for someone else.

There are a range of ways in which trusts can be used, including:

Succession planning – A trust specifies what happens with particular components of the estate, identifies the trustees and beneficiaries, and sets out who should benefit from the trust in the long term. For example, a settlor can put provisions in place so that in case of an early demise he or she would financially support their dependants, in particular any minors, and protect any assets (such as a house) for them.

Education - Many scholarships plans are held in trust structures. The settlor may be an individual, a business or another organisation such as a non-governmental organisation (NGO) who puts assets into a scholarship trust with the aim of helping the disadvantaged.

Buying a home – Family members can set up a trust to provide their loved ones with funds which can be used as a deposit for a home or provide a loan so that they will be able to afford their own home in years to come.

Trusts are also often used as a means of collective ownership. An example is Community Land Trusts (CLTs). These are a US invention and have provided a form of home-ownership for many who otherwise would not be able to afford a home.

Marriage and divorce - Across the globe, more and more people are part of non-traditional families, e.g., divorced with children, second marriages, single parents or same-sex couples. Family arrangements have become more diverse due to increases in divorce rates, cohabitation, remarriage and even surrogacy. Given these trends, families can use trusts to set assets aside for the future and to protect families’ financial interests.

Building and running a business - A common global use of a trust is to set up a family business so that the family members can protect and manage the family’s business assets. In Australia, a number of businesses are set up as trusts as it allows them to take advantage of a 50 per cent capital gains concession and offers asset protection in the case of the business going bankrupt.

Protecting the vulnerable – Trusts are widely used to set aside funds to ensure the future support of someone vulnerable. A prime example of a vulnerable beneficiary would be someone who has developed dementia and lives alone. The trust would tend to this person’s needs as they evolve and would shield them from any potential exploitation (physical or financial).

Charitable Trusts - A charitable trust is set up for specific charitable purposes and the assets are held and managed by the charity for a specified period of time with some or all interest that the assets produce going to the charity. They are commonly used all over the world and according to the Charity Commission for England and Wales, there are over 168,000 registered charities with over £77bn in annual income.

Public perception - Trusts are still broadly perceived in negative terms by the public, exacerbated by media coverage of only the high-profile tax avoidance and money laundering cases and the sense that they are shrouded in secrecy and therefore something to be regarded with suspicion. However, the positive aspects, such as their common use for philanthropic purposes, are rarely publicised.

Time-limited (spend-out) trusts are a powerful way to target funds towards specific causes, with a prime example being the Bill and Melinda Gates Foundation which has made over US$50bn grant payments as at Q4 2018.

Cost of trusts – Cost is not in itself a prohibitive factor in setting up a trust. Coupled with the rise of digitalisation and the accessibility of information online, trusts are no longer something only the ‘elite’ can afford.

Transparency of trusts – Both domestically in the UK and internationally, there is an increasing focus on transparency and tackling financial crime with recent material changes to disclosure requirements ensuring that trusts are no less transparent that an individual’s bank account.

Taxation of trusts – Trusts do not have de facto tax exemptions and there are already laws that govern tax planning. In the UK, trusts are taxed quite significantly. There is therefore a nominal tax incentive to go to the time and cost of setting one up.

Financial Crime - There is no clear evidence that trusts are inherently more subject to abuse than other aspects of the financial system with the evidence in fact showing that the abuse is less likely compared to other vehicles.

The UK’s Relationship With Trusts

Over the last decade, there has been an increase in regulatory tax and transparency measures, such as the UK’s Register of Beneficial Ownership, the OECD’s Common Reporting Standard (CRS) and the EU’s Anti-Money Laundering Directives (AMLDs) which have sought to reduce the secrecy around trusts and safeguard against their misuse.

One example of this regulation are provisions in the EU Fifth Anti-Money Laundering Directive that include the requirement to identify all beneficiaries and related parties; these are more onerous for trusts than for companies as companies are only required to identify beneficial owners in excess of minimum percentage thresholds (25 or 10) whereas trusts need to identify any beneficiary regardless of their interest in the trust. Additionally, particularly in the UK, which has gold-plated and gone beyond in its implementation of the various EU money laundering directives, regulation is very stringent.

There seem to be no signs of the push for greater registration, disclosure, and publication abating. While heavyweight institutions like the OECD, FATF and the Egmont Group note that there is minor potential for trusts to be misused (but far more likely with other financial instruments such as shell companies) it is highly unlikely that this policy direction will be reversed – rather, that additional measures will be introduced.

While trusts are used for legitimate purposes in the mainstream, they have already been subject to internationally driven efforts to mitigate the rare cases of misuse or the potential for their misuse. Their longevity and prevalence do not (and should not) make trusts immune from future change. However, given the breadth of uses of trusts identified in this report, simply prohibiting or penalising their use is likely to have wide-reaching and negative consequences on all aspects of society.

Trusts form key parts of the very fabric of modern society, performing vital functions to serve the social and collective good. At their heart (from education to charities, from home ownership to retirement and protection of the elderly and vulnerable) they ultimately provide a means of ensuring flexibility and control over financial assets and specifying how future generations should be allowed to use them.

Trusts touch every aspect of life. They give young people from disadvantaged backgrounds the opportunity to obtain an education; support in the fight against COVID-19; give people the chance to enjoy a comfortable retirement through occupational pension schemes; and allow minors whose parents have died, or people with disabilities, to be supported through the use of trusts for vulnerable beneficiaries.

There are few substitutes that can wholly recreate their flexibility and offer families, individuals and other groups of people the same level of comfort and certainty about how their assets may be used in the future, which in itself is a fundamental right.

It is for practitioners, regulators, policymakers and the public to determine how the use of trusts will evolve in future. In pulling together the available evidence, the Trust report seeks to create a more detailed picture about trusts and how they are used, and to demonstrate the important role that they play in what may be very ordinary contexts.

Robert Carington
Robert Carington is Policy Executive at STEP. Robert has over three years of policy experience, gained at the UK Chamber of Shipping, where he was a Policy Advisor. Prior to this, Robert spent four years working in a variety of roles and companies in the Middle East. Robert has a BA in War, Peace and International Relations from the University of Reading and a MSc in International Shipping and Finance from Henley Business School.

IFCs’ “Secret Sauce”: A Commitment To An Effective Legal Infrastructure

Beyond Tax: Island IFCs Have Been Out Of The Tax Game For Years But May Still Suffer From G20 Shenanigans