Over the past year, there has been much excitement in the media about non-fungible tokens (NFTs). Most of this has focused on the spectacular amounts of money some people seem to be willing to spend on low-resolution images of apes and kittens. There was also a brief flurry of interest in the potential use of NFTs in “the metaverse”. Much less talked about, however, has been the wider use of NFTs as representations of property and the implications for the financial ecosystem.

The Credibility Of ESG Metrics…

On 11 March 2021, Vignesh Sundaresan (aka @MetaKovan) bought Beeple’s Everydays: The First 5000 Days for US$69.3 million, the highest price ever paid for a digital work of art.[i] It was the first time many had heard of an NFT. It also represented the start of a boom. The chart below shows prices and volume of transactions on OpenSea, the leading NFT marketplace. In June 2018, 26 NFTs were traded on the OpenSea, for a total amount of US$52.78.[ii]  In January this year, OpenSea saw nearly 2.5 million trades for a total amount of nearly US$5 billion – though it has declined considerably since then. 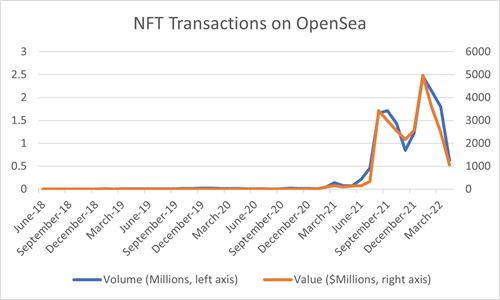 The craze for art NFTs has likely led to misconceptions regarding both their nature and potential. At heart, NFTs are a means of demonstrating ownership of property, whether virtual or real. As their name suggests, NFTs are distinguished from other kinds of blockchain-based tokens, most of which are fungible, i.e. interchangeable. In many cases, token fungibility is a valuable feature. Bitcoin and other early blockchain tokens were designed to be fungible so that they could be used like money: one BTC or one LTC (Litecoin) is equivalent to another BTC or LTC. By contrast, each NFT is unique, making it capable of representing something else that is also unique.

Early attempts to establish blockchain-based systems for music recordings using fungible tokens were not successful.[iii]  This was likely at least in part because there was nothing intrinsically unique about the item that was being sold—there was little that distinguished it from an MP3, FLAC, or (Apple) AAC file. NFTs, by contrast, enable musicians to offer items of unique value to their fans. Bands such as Kings of Leon have already made significant profits from the sale of music NFTs.[iv] And over the past year, an entire ecosystem of NFT-based music has emerged, ranging from decentralised autonomous organisations (DAOs) sponsoring emerging artists to rap star-turned-entrepreneur Snoop Dogg promising to convert Death Row Records into the first NFT-based label.[v]

Beyond art and music, so-called “enterprise” NFTs enable companies to document the uniqueness of individual products, helping to protect supply chains and prevent fraud and theft.[vi] Likewise, entire companies could be represented by NFTs: one NFT per company, with shares in the company being represented as fractions of that NFT or as fungible security tokens linked to the NFT by a smart contract, and debt represented as smart contracts also linked to the NFT. With companies effectively structured on blockchains in this way, custody would not rely on trusted third parties and would be less costly, and settlement (by smart contract) would be practically instantaneous.

NFT-based property registries could offer a lower-cost and more secure alternative to traditional land registries. Earlier attempts to use fungible tokens for land titling and transfers faced significant technical hurdles. [vii] The uniqueness of an NFT makes them an inherently more feasible solution—and several companies are attempting to move real estate onto the blockchain in this way.[viii] In jurisdictions with effective existing title systems, NFTs could bring down the cost of transferring and mortgaging property—though this is far from certain and much will depend on legal and statutory rules.[ix] Potentially far more transformative, for the billions of people who possess land but are currently unable to mortgage or transfer that land because they lack secure title, NFTs could be a cost-effective way to establish good title.

These and other possible uses cases for NFTs could have profound implications for finance in general and offshore finance in particular. For example, NFT-based property registries could in principle unlock trillions of dollars of “dead capital”.[x] While weak legal systems would remain a challenge in many jurisdictions, this could be at least partly overcome by domiciling the property registry in a jurisdiction with a better functioning legal system. The same is true for virtual stock exchanges, which could facilitate the issuance of stock NFTs relating to companies in multiple jurisdictions and with owners from all over the world.

Jurisdictions such as the British Virgin Islands (BVI), Cayman, and Mauritius seem ideally suited to host such virtual property systems for at least two reasons: First, their tax neutrality, strong rule of law, and local expertise has already made them important domiciles for many joint ventures, special purpose vehicles (SPVs), and other entities with investments in countries with weak rule of law.[xi] Second, these same factors plus their generally more flexible regulatory regimes have made them attractive domiciles for blockchain companies seeking investment from people and companies in multiple jurisdictions.

If tax-neutral jurisdictions were to embrace the true possibilities of NFTs, and blockchains more generally, they could place themselves at the heart of “the metaverse”. And that could well put them even more at the heart of the global financial system.

The idea of the metaverse was invented by Neal Stephenson in his 1992 novel Snow Crash. Stephenson envisioned a future in which people would interact in both the real world and virtual worlds—the latter being the metaverse. When in the metaverse, people can interact with individuals who are physically thousands of miles apart.

Much of the popular discussion of the metaverse over the past six months has focused on the rather ephemeral aspect of this, namely the role of avatars, perhaps because these are easy to envisage, perhaps because such avatars are already economically important due to their role in games such as Roblox, Minecraft, and Fortnite. Axie Infinity, which uses NFT-based avatars, saw the number of players rise from around 20,000 to over 2.5 million in the past two years – generating over US$4 billion in NFT sales.[xii]

A potentially far more important aspect is the ability for transactions in the metaverse to have “real” effects (that is, beyond those on the employees and shareholders of game companies—and the kids who spent their lunch money on avatars). That’s where the concepts above come into play.

If a farmer in a country with a weak property rights system, such as Haiti or Afghanistan,[xiii] can establish good title to her land by minting it as an NFT hosted on a blockchain domiciled in a tax neutral jurisdiction, and mortgage it using a smart contract, she can then make improvements to her land. Or she might use the funds to build an entrepreneurial business, also minted as an NFT and domiciled in a tax-neutral jurisdiction.

[x] In 2001, Hernando de Soto estimated that weak property rights were responsible for US$9.3 trillion dollars in “dead capital” – i.e. capital that could not be accessed by the de facto owners (or anyone else). https://www.imf.org/external/pubs/ft/fandd/2001/03/desoto.htm

[xii] https://activeplayer.io/axie-infinity/; https://finance.yahoo.com/news/axie-infinity-breaks-4-billion-173902325.html. Unfortunately, the rapid growth in in-game and art NFTs may have led some companies to take short-cuts in security and oversight. Hackers recently stole US$625 million in tokens from Axie Infinity’s parent, Sky Mavis, and the Axie DAO. It is believed that the hackers achieved this by taking over 5 of Ronin’s 9 validating nodes, enabling them to undertake a 51 per cent attack. This is a little ironic given that the decentralised blockchain validation systems for tokens such as Bitcoin and Ethereum are specifically designed to avoid such attacks. Having only 9 validators seems rather foolish and highlights the difficulties in building robust blockchain networks that are also fast and cost-effective. https://www.finder.com/axie-infinitys-ronin-network-suffers-largest-hack-in-defi-history Ironically, these problems highlight the dangers of centralisation—and indicate that what is needed is more decentralisation, not more (inherently centralised) regulation.

Julian Morris FRSA
Julian Morris has 30 years’ experience as an economist and policy expert. In addition to his role at Unicus, he is a Senior Fellow at Reason Foundation and a Senior Scholar at the International Center for Law and Economics. The author of dozens of peer reviewed publications, white papers, and book chapters, Julian is a member of the Editorial Board of Energy and Environment. A graduate of Edinburgh University, he has masters’ degrees from UCL and Cambridge, and a Graduate diploma in law from Westminster. Julian is also a member of several non-profit boards.

The Credibility Of ESG Metrics