Since its establishment more than 30 years ago, Labuan International Business and Financial Centre (Labuan IBFC) has developed to become an innovative and well-regulated centre for both global businesses looking at penetrating Asia and Asian entities aiming to go global.

With its wide array of structures and solutions, Labuan IBFC has welcomed over 17,000 registered companies and more than 880 licensed entities in the banking, leasing, capital markets, insurance, reinsurance, risk management, digital financial services and wealth management segments. This article highlights the current strengths of Labuan IBFC’s financial services industry and maps out the jurisdiction’s plans for 2023 and beyond.

A Well-Regulated Ecosystem for the Captive Business

Labuan IBFC is one of the fastest-growing captive domiciles in the world and its captive insurance business has witnessed continued development in 2022. As at Q2 2022, the Labuan insurance industry recorded total gross premiums of US$1.7 billion and is home to 229 insurance and insurance-related entities, including 63 captives.

Furthermore, Labuan IBFC is currently the only jurisdiction in Asia that offers protected cell companies (PCCs). The PCC structure is a cost-efficient vehicle for self-insurance and provides an alternative risk management framework. In the last six months, there has been a significant rise in the number of PCCs being established in Labuan. The jurisdiction is also home to the world’s only Shariah-compliant captive. 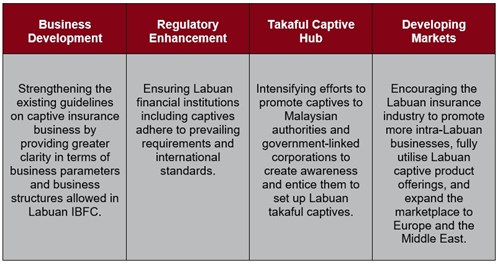 While one takaful captive already exists in Labuan, there is continued interest in this space and Labuan FSA, Labuan IBFC’s regulator is confident that the jurisdiction can leverage on Malaysia’s strength as a pioneer in takaful development. In 2023 and beyond, the plan is to intensify efforts to promote captives to Malaysian authorities and government-linked corporations to create awareness and entice them to set up Labuan takaful captives.

In addition, sustainability and ESG (Environmental, Social and Governance) principles have currently risen to prominence in the insurance industry, meaning that captives must understand their implications and possible risks. It was noted in the recent Asian Captive Conference that captives in Labuan are poised to play a key role in the alternative risk industry as they are well-positioned to identify, implement and establish an ESG framework, document a company’s ESG issues and address them accordingly.

By reacting to market developments and offering unique products and structures, Labuan is setting itself apart from its competitors as the first choice for international risk management in Asia.

As COVID-19-induced physical restrictions resulted in a surge in demand for virtual products and solutions, the demand for digital assets, and by extension, digital financial services in Asia has become more pronounced than ever. As such, Labuan IBFC is planning to build on this momentum by staying well ahead of the curve in the digital space.

With a thriving digital ecosystem in place, the focus is currently on further accelerating growth by turning Labuan into a digital innovation hub. In the recent unveiling of the Labuan IBFC Strategic Roadmap for 2022-2026, which charts the way forward for the jurisdiction over the next five years, the Minister of Finance discussed the future of Labuan IBFC as a fund raising and investment hub in the global digital space that is Shariah-compliant and underpinned by a comprehensive set of laws and regulations.

The Minister elaborated: “The strategic goal is to attract more digital asset and fintech players to Labuan, as well as to carve out a niche in the digital Islamic finance space.” This goal is in line with Labuan IBFC’s progressive and facilitative approach to financial innovation that has made the jurisdiction an ideal hub for digital services establishments.

Through structures such as private foundations, Labuan IBFC is an ideal base for advancing wealth management needs.

The recently-amended companies legislation governing Labuan IBFC demonstrates the jurisdiction’s ability to meet the demands of the international finance industry.

The Labuan Companies (Amendment) Act 2022 was gazetted on 9 June 2022 and was effective 10 June 2022; it provides rules for the incorporation, registration and administration of domestic and foreign Labuan companies.[i] Such amendments aim to bring Labuan IBFC’s company law in line with Malaysian domestic laws as well as international guidelines.

In addition, the Labuan Financial Services and Securities (Amendment) Act 2022 and the Labuan Islamic Financial Services and Securities (Amendment) Act 2022 were also recently gazetted. Amendments include revising the definitions of “Labuan insurance business” and “Labuan takaful business”. These updates to established legislation are evidence of Labuan IBFC’s commitment to evolving alongside industry trends and developments.

The Strategic Roadmap was formulated by taking into account the current strengths of the jurisdiction, potential opportunities within its reach, and challenges ahead that may affect the regional business landscape going forward.

The Roadmap charts the way forward for the development and progress of Labuan IBFC over the next five years by highlighting several key strategic thrusts: 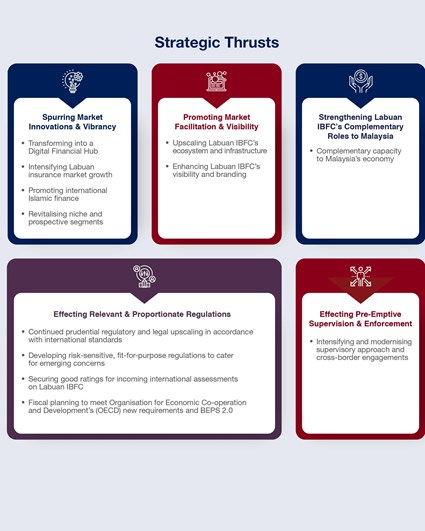 The next phase of development will focus on Labuan IBFC’s growth prospects. Labuan FSA will continue to collaborate with Labuan industry associations to ensure better facilitation in implementing new requirements while ensuring business sustainability.

With the Roadmap as its foundation, Labuan IBFC plans to reinforce its position as Asia’s premier international financial hub in a well-regulated, transparent and substance-enabling environment with diversified products and solutions.

Despite challenging economic conditions and the shifting dynamics of the global financial landscape over the past several years, the jurisdiction has demonstrated continued resilience and innovation in key sectors such as wealth management, digital financial services, Islamic finance and captive insurance as well as in the traditional segments of banking and reinsurance.

By promoting greater market development and business expansion, as well as ensuring strong regulation and compliance against ever-changing regulatory and tax standards, Labuan IBFC will continue to evolve into a dynamic and sustainable international financial centre that links and supports the economic growth of Asia’s markets and contributes to the national economy.