Labuan is located off the coast of Sabah, East Malaysia with a population of around 100,000, where business meets leisure and common time zones with major cities. As an innovative and ever-evolving jurisdiction, Labuan IBFC is the only jurisdiction in Asia that offers private foundations as a wealth management solution. This article looks at the typical structure of a Labuan Foundation and explores its advantages in detail, including the Labuan Islamic Foundation.

Labuan: A Leading Domicile For…

Why Set Up A Labuan Foundation? 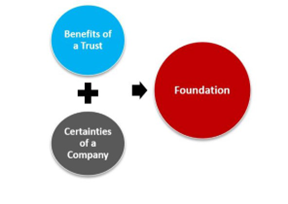 A Labuan Foundation is a legal entity administered by a charter and articles. A foundation has separate rights as an independent person and can enter into contracts, acquire properties, own a bank account or even own a share in its own name.  Having a foundation gives you both the benefits of a trust and the certainty of a company.

Labuan Islamic Foundations can be established under Section 107 of the Labuan Islamic Financial and Securities (Amendment) Act 2022, and all provisions under the Labuan Foundations Act 2010 shall be applied accordingly. The purpose or the objective of setting up of Islamic foundation must comply with Shariah principles. Thus, an Islamic foundation is required to appoint a Shariah Adviser to advise on the Islamic matters that go along with the Shariah principles. Aside, the endowment may be facilitated by way of Hibah or Hadiah.

LIWF can be established for four different types of Waqf:

Charitable Waqf (al-waqf al-khai’ri): Where the main purpose is charitable.

Family Waqf (al-waqf al-ahli): Where the main purpose is for family members and relatives. However, if none of the family members or relatives are in existence, it will be used for charitable purposes.

Joint Waqf (al-waqf al-mushtarak): Where the income/usufruct is shared between the family members and for charitable purposes.

Self-Dedicated Waqf (al-waqf ala al-nafs): Where the income/usufruct is retained for the founder (waqif) and is used for charitable purposes after his death.

Advantages Of A Labuan Foundation

The various benefits of setting up a foundation in Labuan IBFC are set out below: 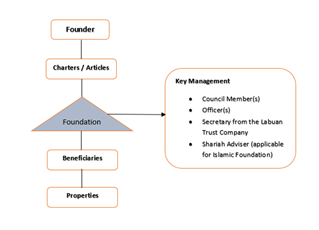 A Founder may form a Labuan Foundation by filing the foundation's charter, specifying the initial assets endowed for the foundation's establishment, and meeting all other applicable regulatory requirements by Labuan Financial Services Authority (Labuan FSA). Such assets are managed in the interest of beneficiaries who could really benefit from it despite the fact that foundation holds ownership to it. The Founder may also appoint the council member and officer for the foundation. The above picture is the common structure of a Labuan Foundation. There are three key members of management for a normal Labuan Foundation which are Council Member, Officer and the Secretary. However, for the purpose of LIWF, a Shariah adviser is one of the key members of management included.

Benefits Of A Labuan Foundation/LIWF

The Labuan Foundation may be most helpful when clients know what their ideal goals and objectives are, given that it is officially registered, able to control the property, and is believed to be significantly more regulated than other wealth management products by having its own Charter and Articles of Regulations. A foundation can act as a comprehensive answer for high-net-worth individuals and families who desire to manage, maintain, and protect their wealth. As a way for wealth preservation and succession, the Labuan Foundation is designed to fulfil the wish of the founder.

Mari-Len Ngu, TEP
Madam Mari-Len NGU who holds the Managing Director, Head of Group Regional Client Coverage position has 20 years’ experience in the Trust and Fiduciary industry and Corporate Governance, leading the Private Clients team in Hong Kong, Singapore and Jersey Channel Islands where she works physically and develops international workflows and processes within those jurisdictional applicable laws and practices. She subsequently Headed the Corporate Secretarial, APAC in 2014 where she worked with TMF Group (formerly Equity Trust). Her experience includes International Corporate Structure planning in cross border transactions and business expansion. She has been interviewed by Edge Magazine and has also been invited to be the keynote speaker at international events in HK, Ho Chi Min, Bangkok, to name a few, focused on Wealth Management/ Labuan IBFC’s structures, as well as its commercial and financial products and to promote Labuan IBFC as the preferred midshore jurisdiction in Asia.