Propaganda, Perception, And Power - Who Are The True Enablers Of Financial Crime? 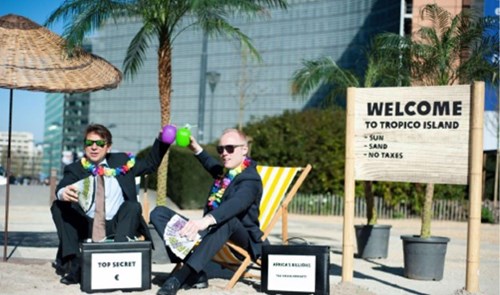 Oxfam easily exposed the EU’s blacklist as farcical, then played very nicely into the prevailing narrative that tropical islands are the world’s worst tax havens by headlining its report with the image above, despite reporting that “Netherlands, Luxembourg, Ireland and Cyprus are among the world’s worst corporate tax havens”, and “at least four (EU member states) should feature on the EU blacklist if screened against the EU’s own criteria: Ireland, Luxembourg, Malta, Netherlands”. Furthermore, of the 39 countries Oxfam found should feature on the EU blacklist if the EU applied its methodology objectively and universally, the majority are NOT TROPICAL ISLANDS: Albania, Bahrain, Bosnia and Herzegovina, Cyprus, Former Yugoslav Republic of Macedonia, Gibraltar, Greenland, Guam, Hong Kong, Ireland, Jersey, Luxembourg, Montenegro, Netherlands, Oman, Serbia, Singapore, Switzerland, Taiwan, and the UAE.

Perhaps Oxfam’s (unconscious) bias led to their utterly unjustified depiction of tropical islands as ‘tax havens’ in direct contradiction to their own findings. But this depiction is consistent with the stereotype[i] constructed by the global North via relentless disinformation and smear campaigns, including the very EU blacklists Oxfam was criticising. One wonders whether Oxfam even realises how brainwashed they are by the patently false narrative constructed by first-world propaganda. And what about the rest of us - how captured are we?

Bottom line - the evidence shows that 1. illicit financial flows[ii] exist in just about every country on Earth[iii], but 2. the countries consistently named and shamed are not the ones responsible for the majority of financial crime[iv], while the real culprits get a free pass[v], because 3. blacklisting is not at all about addressing financial crime - it’s about politics and power.

If the OECD and EU are interested in addressing illicit financial flows, they should start with their own members where financial crime thrives, based on the abundant evidence.

OECD members are responsible for over 2/3 of the world’s corporate tax abuse[vi], and even EU members of Parliament highlighted that EU countries are responsible for 36 per cent of tax havens.[vii] But EU Blacklisted countries account for less than 2 per cent of worldwide tax revenue losses. Furthermore, Tax Justice Network’s financial secrecy index[viii] shows that the world’s largest suppliers of financial secrecy are the US, Switzerland, Singapore, Hong Kong, Luxembourg, Japan and Germany - none of whom have ever been blacklisted or otherwise penalised. Why would the EU waste its time chasing 2 per cent of the problem (which is in direct contravention of the EU’s own proportionality doctrine, by the way)?[ix]

Another unambiguous indication that ulterior motives drive EU blacklisting, is the open and clear absence of transparency throughout the blacklisting process, which again was identified by Oxfam since 2017 - “the EU’s fight against tax havens…has been in the hands of one of Brussels’ most secretive working bodies, the so-called Code of Conduct Group. Its mandate stresses that its work should be confidential…Negotiations happen behind closed doors, and all countries participating in the process refuse to communicate or to release any information…drawing up of international lists of tax havens has been extremely political… jurisdictions such as Hong Kong or Switzerland, which are documented as having been used as tax havens, mysteriously being left off the lists.”[x]

Furthermore, the asymmetry and unfairness of the EU’s selective application of their secretive blacklisting process as highlighted by Oxfam since 2017 through to 2022 by Tax Justice Network[xi], makes the EU’s ulterior motive embarrassingly obvious. But the EU’s unhidden agenda behind blacklisting and its supporting propaganda machinery persist uninterrupted today because of politics and power - the EU is undemocratic, untouchable, and unambiguously uninterested in addressing financial crime. So, what is this really about?

“When a country runs a current account deficit, it is building up liabilities to the rest of the world…Eventually, these need to be paid back. When countries run large deficits, businesses, trade unions, and parliamentarians are often quick to point accusing fingers at trading partners and make charges about unfair practices.” - IMF[xii]

"For decades, American workers and taxpayers have paid the price for a tax system that has rewarded multinational corporations for shipping jobs and profits overseas. This race to the bottom hasn’t just harmed American workers, it’s put many of our allies at a competitive disadvantage as well” - US President Joe Biden[xiii], on the signing of the Global Minimum Tax (GMT), which incidentally even Oxfam called hypocritical[xiv], especially since the US is the world’s largest supplier of tax secrecy.[xv]

And despite being the world’s largest supplier of tax secrecy, the US has carried a current account deficit since 1992, indicating a likely competitiveness problem, somehow.

This statement by the US President clearly captures the problem that the OECD and the EU are really trying to solve with blacklisting and now the GMT - the global North’s declining competitiveness, and in lockstep, its diminishing economic power and dominance. 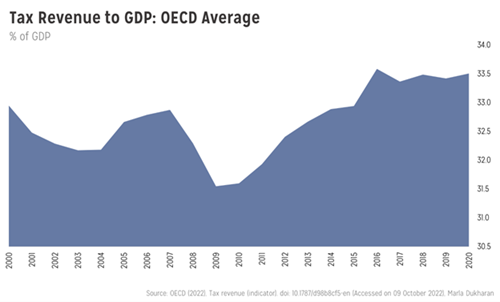 “Corporate income taxes are the most harmful for growth as they discourage the activities of firms that are most important for growth: investment in capital and productivity improvements.” – OECD.[xvi]

The delicious irony of this OECD finding, especially in the context of the GMT, is that OECD countries are among the highest taxed globally, with average tax revenue at 33.5 per cent of GDP. The OECD’s resulting uncompetitiveness is demonstrated by persistent current account deficits from 2005 to 2015, with the widest surplus on record a mere 0.42 per cent of GDP in 2017. 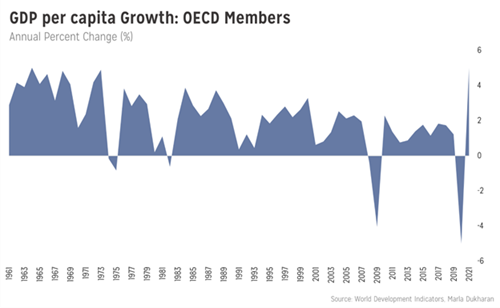 The OECD’s uncompetitiveness also reveals itself in their per capita GDP growth rate, which peaked at 6.1 per cent in 1973 but has been on an overall downward trend since, despite the OECD expanding its membership from 20 countries in 1960 to 38 now, including some emerging economies. 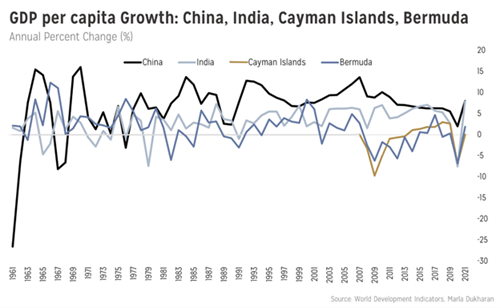 Conversely, per capita GDP growth rates in India, China, the Cayman Islands, and Bermuda for example, are more stable over time, with China and India on an overall upward trend over the same period. 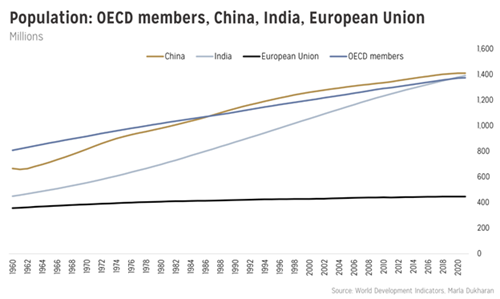 China is the world’s largest exporter and has been for more than a decade, demonstrating its global competitiveness unambiguously. Furthermore, by 2030, the world’s top 10 most populous nations will feature only one OECD country - the US. Meanwhile, the EU’s population has flatlined for some time, stoking fears of the ‘jungle invading the garden’[xvii], and the OECD’s population growth is slowing[xviii], which will likely weigh further on GDP growth and economic dominance. 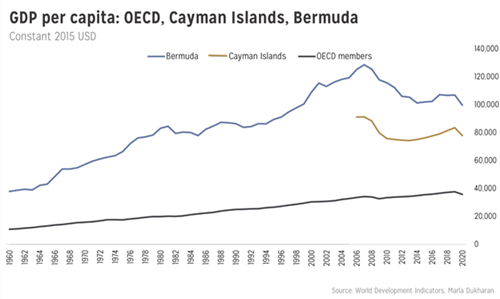 The spread of Cayman and Bermuda’s GDP per capita over the OECD and EU[xix] average is wide but declining, given the EU’s unrelenting assault on these micro-states, damaging them reputationally[xx] and economically by unilaterally and selectively imposing ever-changing rules, while bending these same rules[xxi] and making allowances for their own members[xxii] to support their own competitiveness. This is what EU Blacklisting and the GMT is all about. 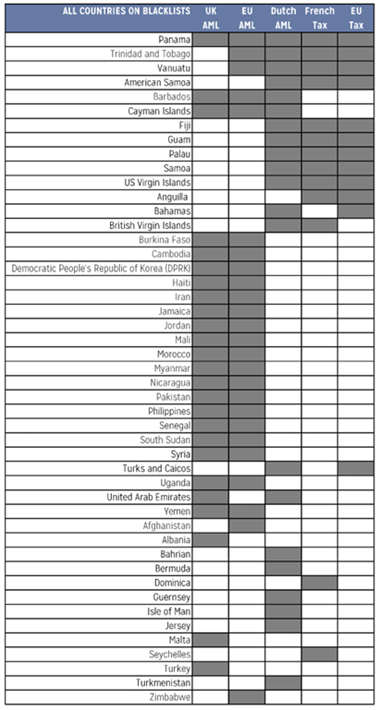 Hypocrisy At Its Highest

In addition to the EU’s hypocritical and indefensible blacklists designed to destroy the economies of small, non-white former European colonies, individual EU member states have also shamelessly embarked on their own assault on their former colonies.

“There are broadly speaking two views about the City of London. One is that the City of London refers to those activities and transactions taking place in London itself. The other is that the City of London is the core of a whole network of other financial centres…In many cases financial transactions are being decided and agreed upon in London, but are being registered for various reasons (mainly tax-related) in, say, the Cayman Islands. As a result the Cayman Islands appears statistically as the fourth largest financial centre in the world…But it’s only a paper centre: most of the activities attributed to it in fact take place in London”, according to Nick Shaxon, author of Treasure Islands.[xxv] 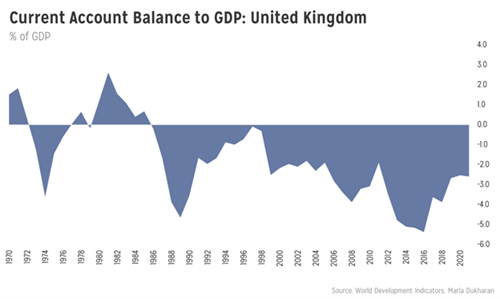 I probably don’t need to discuss the UK’s spectacular economic collapse recently, but the UK has also maintained a current account deficit since 1986, clearly indicating some long standing uncompetitiveness. So of course the UK has had to publish its own blacklist of ‘high-risk’ countries[xxvi], following the EU’s lead, in an attempt to destroy the competition from its former colonies and other weaker states.

“Russians didn’t choose the Caribbean to hide their money - they chose the Metropoles. They chose London and New York and Switzerland and Luxembourg”, Barbados’ Prime Minister recently testified before the US Congress.[xxvii]

The evidence is abundant and unambiguous. Blacklisted countries and tropical islands more specifically are NOT the major players in illicit financial flows - OECD and EU countries are. They are beating us badly at this game, and they know it. But this is evidently not enough.

Just like destroying Usain Bolt's football dream didn’t change anything for football, destroying ‘the jungle’[xxviii] with lies, blacklisting, propaganda, and now the GMT, will never make ‘the garden’[xxix] great again - that ship has already sailed.[xxx]

“Don’t believe me, just watch” - Trinidad James, All Gold Everything

Marla Dukharan
Recognised as a top economist and advisor on the Caribbean, Marla has led discussions and published reports on the Caribbean implications of COVID-19, the EU Blacklists, BREXIT, and changing US and Chinese policies, among other geopolitical developments. Marla has become a highly sought-after keynote speaker internationally on Caribbean issues, and she regularly advises private sector executives and multinationals to support their strategic decisions in the region.

On The Nature Of The Political Influence In International Tax Competition

Of Trust And Trusts

Clean Up Your Own Backyard