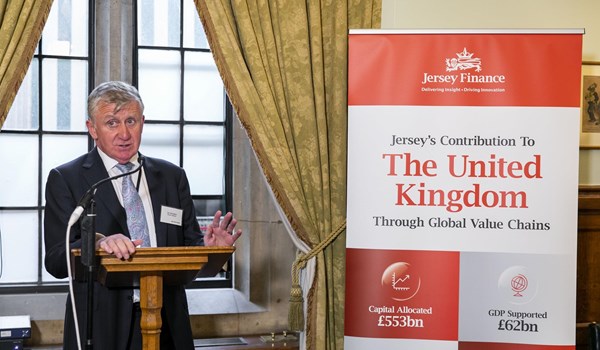 The findings of a major research project focused on Jersey’s global economic footprint were presented to Members of Parliament at a special reception on Wednesday (20 July) in the House of Commons.

The reception, hosted by Jersey Finance, provided an opportunity for Parliamentarians and special guests to hear more about the value Jersey’s financial services industry adds to global economies, based on the conclusions of the Jersey Finance-commissioned ‘Jersey’s Contribution to Global Value Chains’ report.

Against the backdrop of the 60th anniversary of Jersey’s international financial services industry last year, the event also acted as a forum to discuss how globalisation is evolving and impacting cross-border financial flows.

Speaking at the event, Joe Moynihan, CEO, Jersey Finance, outlined the strong ties between Jersey and the UK, and Jersey’s instrumental role in supporting the UK’s prosperity and global ambition. He also highlighted the key findings from the report, undertaken by independent economics consultancy the Centre for Economics and Business Research (Cebr), including:

“For a jurisdiction of its size, the value Jersey adds globally to economies is impressive and this forum gave us a fantastic platform the get that message across to a key audience of policy makers and showcase Jersey’s role as a crucial economic conduit.

“Our Global Value Chains report demonstrates how strong the ties between Jersey and the UK truly are and provides evidence of Jersey’s significant contribution to the UK and that was appreciated by attendees. In addition, though, the report also emphasizes the global capabilities Jersey has as a secure and stable centre for mobilizing capital and that message was received extremely well in the context of a globally-focused post-Brexit Britain and in light of the ongoing instability in Europe and further afield.”

The report quantifying Jersey’s global economic footprint can be viewed and downloaded via this link.