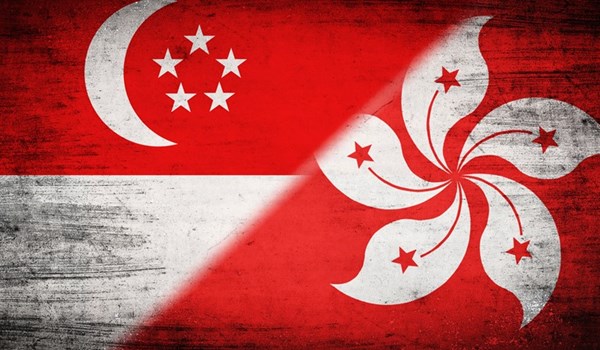 Financial Secretary Paul Chan has defended Hong Kong’s reputation as an Asian hub, listing the ways in which it has an edge over regional rival Singapore despite Covid-related measures undermining Hong Kong’s economy.

Chan’s comments, made in a blog post on Sunday, were in response to the Global Financial Centres Index published last month that saw Hong Kong lose its third-place spot to Singapore. The city now ranks fourth.

“Hong Kong’s slip one rank down to fourth place has triggered widespread discussion,” Chan wrote. “But if you look at the content [of the rankings] closely, Hong Kong’s total score has actually increased by ten, a larger scale than the top two placers, New York and London.”

Chan did not add that Singapore’s total score rose by 14.

He said many people compared the finance industry in Hong Kong with Singapore, but that these discussions “often relied on vague impressions.”

Hong Kong outmatched Singapore in areas including economic contribution and green finance according to the finance secretary, who added there was “no need to sell ourselves short.”

The city’s economy has been hampered by strict Covid-19 rules over the past two and a half years. The requirement that travellers quarantine in a hotel upon arrival was only scrapped last month, a move that followed pressure from industry leaders.

The government said last month that there was a “very high chance” Hong Kong will end the year in a recession.

Published twice a year, the Global Financial Centres Index assesses the favourability of financial hubs based on factors including quality of life, ease of doing business and tax rates.

In a press release about Hong Kong’s newest ranking, the government did not mention the city’s drop in placement. “We will continue to listen to views and be bold in taking forward reforms to consolidate and strengthen Hong Kong’s capital market and our role as an international financial centre,” the release read.

Chan echoed the release in his Sunday blog post. “As we gradually return to normal, Hong Kong’s ubiquitous, vibrant, and life-enriching characteristics will continue to attract talents and companies – in finance and other fields – from all over the world to settle here and embrace opportunities,” he wrote.