The Corporate Services Industry- Confidence in The Midst of Uncertainty

It’s clear that the ongoing adjustment to globalisation is creating political pressure for governments to feel the need to redefine their role in business. Governments are asserting themselves by establishing rules for businesses – Common Reporting Standards (CRS), central registry of BO, global tax accounting standards, etc. – all demonstrate that governments are trying to catch up to businesses in becoming truly global. And although these regulations may be unsettling to the industry, the situation also provides a prime opportunity to use these policy measures, that were once considered threats, to instead legitimise the industry in the public opinion.

The 2018 version of our thought leadership report ‘Vistra 2020’ is the eighth edition and is themed ’The disruption advantage: opportunity in a changing world’.  What’s become evident through our research is that although the world is facing geopolitical upheaval in response to globalisation, the corporate services industry is optimistic about how we are able to respond to disruption.  And although major Western powers like the US and UK have taken an inward-focused stance with protectionist attitudes, our research shows that foreign direct investments (FDI) continue to increase. For example, in the US, despite Trump’s US-centric policy orientation, US outbound direct investments (ODI) have steadily increased in the past year to US$437 billion.  This clearly has positive implications for the corporate services industry to facilitate increased capital flows and economic growth.

It’s clear that the ongoing adjustment to globalisation is creating political pressure for governments to feel the need to redefine their role in business. Governments are asserting themselves by establishing rules for businesses – Common Reporting Standards (CRS), central registry of BO, global tax accounting standards, etc. – all demonstrate that governments are trying to catch up to businesses in becoming truly global.

And although these regulations may be unsettling to the industry, the situation also provides a prime opportunity to use these policy measures, that were once considered threats, to instead legitimise the industry in the public opinion.  When we asked survey respondents on their ability to respond to the demands of globalisation, 83 per cent believe they have the ability to satisfy clients’ demands, 74per cent believe in the growth prospect of their organisation, and 62 per cent believe in the ease of doing cross-border business.

When we look at the regulatory impact on the industry, it’s interesting and encouraging to see that the industry feels more confident in their ability to meet regulatory requirements. 78 per cent of the respondents say they are confident in their ability to achieve timely and consistent compliance with new regulations, even though they recognise that speed and frequency of change is a challenge. The point is that they are feeling positive in their proficiency to meet regulatory expectations, which is a shift in mind- set from previous years.

As the chart below shows, one example is the full implementation of CRS in the coming years.  Even though 76 per cent of respondents expect full implementation of CRS, they predict the impact will not be as significant as first anticipated in 2017.  And if you look at all the entire list of regulatory and industry ’disruptors’, aside from technology, there has been a decrease since 2015 in the likelihood that these regulations will impact the industry. 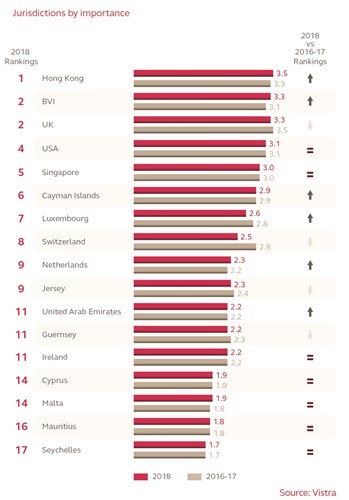 It’s clear that we will continue to see an increase of Foreign Direct Investment (FDI), which means jurisdictions that facilitate these financial flows will continue to be of importance to the global economy; hence, we need to also consider the popularity of jurisdictions for doing business.  With the increase in demand for transparency and negative publicity towards ’offshore’ centres, it would be easy to assume that offshore jurisdictions might fall out of favour.  However, our research shows that there has been limited change in the popularity of jurisdictions. Hong Kong climbed up one spot from last year and tops the list, followed by the British Virgin Islands (BVI), the UK, the US and Singapore – all ranked top five last year. The ranking reflects two trends: 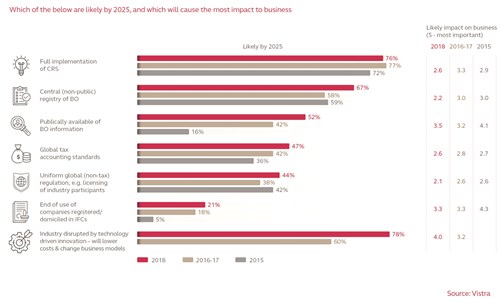 The trend toward onshore and mid-shore is continuing, with the top five dominated by IFCs either in or close to the world’s political centres.  These include Hong Kong, UK, US, and Singapore as the part of the top five.

The UK vs Hong Kong

Last year UK was ranked number one, whereas this year it has moved down in ranking.  In prior years, Brexit was not an issue and the UK’s favourable corporate tax rate and flexible labour legislation provided a friendly environment as an IFC. Even in late 2016, when we last conducted the survey, there was greater optimism about the outcome of UK’s withdrawal negotiations.  However, with Brexit imminent, this year’s respondents have a more sober outlook on Brexit implications. Only 35 per cent of respondents expect the UK to become more open to the industry and IFCs after Brexit.

With the UK dropping in ranking, this has allowed Hong Kong to take on the number one spot.  This is due to a number of factors including a rise in Chinese companies listing on the Hong Kong Stock Exchange and a growing base of Chinese High Net Worth (HNW) individuals who look to Hong Kong service providers to meet their increasingly sophisticated needs. In addition, Hong Kong competes with mid-shore jurisdictions and continues to introduce new products, such as aircraft leasing to meet growing aviation demands in Asia.

A small number of traditional offshore jurisdictions, specifically the BVI and the Cayman Islands, are performing well, driven by expert capabilities in incorporations and fund structuring respectively. This indicates that the industry is resilient in the face of negative public opinion.  In fact, the BVI ranks close behind Hong Kong in its importance to clients – taking the number two spot, up from third last year.

Cayman Island is worth noting as it was ranked sixth in our survey and continues to benefit from having a reputation for efficient fund structuring and growing popularity for incorporations. This indicates that although there is some economic uncertainty and negative public perception, clients often turn to familiar and reliable jurisdictions. These two jurisdictions are also established trade routes for Asian businesses, which has grown compared to other regions and continues to demand offshore services and IFC capabilities.

It’s also important to note that aside from the jurisdictions listed, emerging markets will increase in importance. For example, the Middle East is becoming more popular for structuring services due to volatility in the oil market, and firms in India are increasing their overseas investments.  And despite speculation about a downturn in China, it’s clear that with the Belt and Road initiative (BRI), China’s global influence will continue to grow with its outbound investment increasing to US$25 trillion over the next decade.

This doesn’t mean these jurisdictions can become complacent.  The regulatory environment, especially as it relates to EU blacklisting and beneficial ownership transparency, means that all jurisdictions will need to continue to work closely with policy makers and regulators, and innovate to ensure their services and capabilities remain attractive and competitive.

The challenges and uncertainties of globalisation are not to be understated. However, we are seeing the industry rise to the challenge and take a more optimistic view towards the future in driving economic growth.  There will continue to be on-going healthy debates on new regulations, how the industry will respond to new technologies, and the need to improve public perception of the industry – but this is good news as it means that people are engaged and discussing opportunities for enabling global economic growth.

Jonathon Clifton
Jonathon Clifton is Managing Director, OIL Asia with P&L responsibility for the region. He is a member of the Group’s Global Executive Committee and speaks regularly at international conferences on the future state of the offshore industry. He has over 18 years of experience in a range of strategic business development, consulting, client relationship and corporate strategy roles in a career that has taken him throughout Asia Pacific.