The Global Financial Centres Index (GFCI) developed from a piece of research on the competitiveness of financial centres that Z/Yen Group undertook for the City of London in 2005. Previous research compared a small number of centres, typically just London, Frankfurt, Paris, and New York. Financial centre strength was already widely distributed at that point, and Z/Yen developed the GFCI to offer a dynamic measure of the strength of financial centres across the world. The first edition of the GFCI was published in 2007. In September 2020, Z/Yen published the 28th edition of the index, which is updated twice a year.

The GFCI is a factor assessment index that combines two distinct sets of data to create a rating for financial centres:

In 2007, GFCI 1 provided ratings for 44 financial centres, including just two IFCs – Cayman Islands and Bermuda.  GFCI 28, published in September 2020, provides ratings for 111 financial centres worldwide, including around 10 IFCs.  This growth reflects the growth of the world economy and trade, with an ever-increasing demand for financial solutions to meet the requirements of today and the future.  The growth also reflects the fact that, for a moderately advanced city, financial centres can have an outsized impact with a few policy and regulatory improvements.

The 2020 COVID-19 pandemic has been an extraordinary shock to the world economy.  Confidence in the financial system has been shaken.  In GFCI 28, only 22 centres received an increase in their ratings, significantly all the top 10 centres.  This flight to the safety of the long-established leading centres, such as New York, London, and Singapore is a clear pattern in the index results.  The last time a similar pattern emerged in the GFCI ratings was in the aftermath of the financial crises from 2007.

A long-standing and strong trend in the GFCI has been the rise of Asia/Pacific centres, with six of the top 10 centres in the GFCI now from Asia/Pacific.  This has changed the dynamic of IFCs as Asia/Pacific has very different demands.

Other headlines from GFCI 28 show that:

IFC Performance In The GFCI

Chart 1 shows the GFCI ratings for IFCs over the five years from 2015 to 2020.  The trend is, on average, downwards and there has been a fair amount of volatility in ratings in recent editions of the index.  The leading IFCs over this period have been Cayman Islands, Jersey, and Bermuda, with other centres tracking each other relatively closely.  In GFCI 28, ratings fell, as they did for most centres outside the top 10. 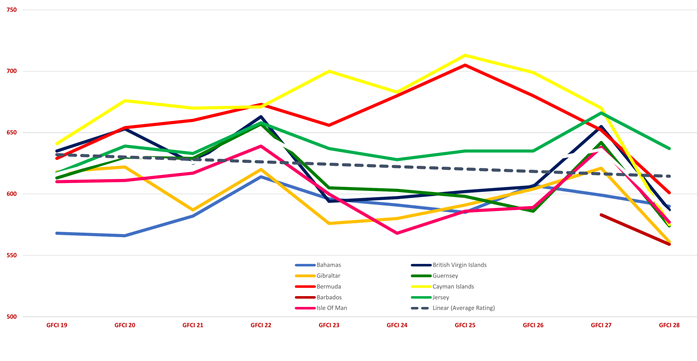 When we look at the ranking of IFCs over time, in Chart 2, we see that the average rank of IFCs in the GFCI has fallen steadily, as more centres have entered the index.  In GFCI 28, Bermuda, Bahamas, the Isle of Man, and recent entrant to the index, Barbados, have increased their rank, while other centres have fallen. 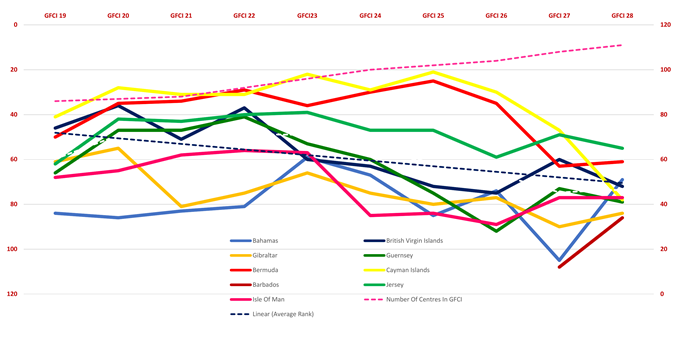 As more and more large cities encourage the development of financial centres, IFCs are unlikely to be able to challenge the dominance of larger centres based in cities that boast a large population, with their access to a large pool of skills, highly developed infrastructure, and breadth of market offerings.

So where can IFCs look to develop their place in the world financial system?  In the GFCI, Z/Yen develops sub-indices using the same model as the main index but using only responses to the questionnaire from people working in particular sectors of finance.  In these sub-indices, people working in investment, insurance, and trade and commodity finance consistently rate IFCs markedly higher than in the overall index. This shows that the future for IFCs continues to focus on areas of specialism and expertise, where they can compete with onshore centres.

When looking at relative assessments, for most IFCs the assessments given by respondents from Western Europe are higher than average.  Western Europe accounts for 20 to 25 per cent of responses for Caribbean centres and 40 to 50 per cent of the responses provided to the Channel Islands and Isle of Man.  This shows a high reputation for offshore centres in Western Europe, perhaps due to their understanding of the role of IFCs and historical links with the onshore financial system.

These results offer an opportunity to IFCs to consider building better connections with Asia/Pacific financial centres and to look for business partnerships in the region.  With the strength of the Chinese economy, and the increasing prosperity of populations in the region, there is a growth in trade and investment finance in the region.

For North America, equally, there is a surprising lack of connectivity, given in particular the closeness of the Caribbean centres to the USA. Again, there are opportunities to improve the reputation of IFCs in the region, and to build business and financial links.

Extending this analysis, we note that the highest performing financial centres in the GFCI are those which have deep connectivity to a large number of places across the world, as shown by the number of people from different centres that assess them in the GFCI survey.  Typically, on this measure, IFCs have strong links to two or three overseas centres, for example, London, Singapore, or Dubai.  To compete more effectively in the GFCI, we suggest that financial centres look to expand the range of people across the world who know them and the advantages which they offer in financial services.

In discussion with financial centres across the world, two strategies repeatedly emerge: sustainable finance and FinTech.  Z/Yen publishes the Global Green Finance Index and the Smart Centres Index alongside the GFCI, tracking financial and commercial centre performance in green finance and in technology and innovation. Success in these two areas is likely to mark out the financial centres of the future. But, as discussed above, IFCs will have to strive harder to specialise and not just follow these fairly obvious strategies.

Competition between financial centres is likely to remain fierce, both at the top of the ranking and within regions, with centres looking to expand the range and volume of their business and to provide an inviting environment for talent.  While larger centres will look to perform well across the whole range of financial services, smaller centres, including the IFCs, will look to specialisation to carve out an advantage.  The better connected all centres are, the more likely they are to succeed.

As the economic recovery from the COVID-19 pandemic begins, some countries are already back to business as usual, while others, notably in Western Europe, predict a permanent shift towards remote working for a substantial part of their business.  The shift to digital commerce, already underway before the recent shock, has intensified.  The impact on financial business and the role of traditional financial centres, with clusters of financial services firms in close proximity, is, as yet, unclear, but Z/Yen will continue to track the development of finance and the role of IFCs as part of the global financial system.

GFCI 29 will be published in March 2021. Please make your views known by participating in the GFCI by rating the financial centres you are familiar with at: www.globalfinancialcentres.net/survey/

Mike Wardle
Mike Wardle is Chief Executive Officer for Z/Yen, managing work on the development and delivery of the Global Financial Centres Index, Global Green Finance Index, and Smart Centres Index. Mike worked as a civil servant for almost 20 years mostly within the field of education policy. He was a director and then Chief Executive of the General Social Care Council, establishing the regulation of social workers. Mike's career moved into consultancy, programme management and coaching and he worked with Z/Yen for six years delivering programme management services to the Church of England, Unison, and the Royal Marsden NHS Foundation Trust and Chelsea and Westminster NHS Foundation Trust before taking up his current role.